I have looked at the various other issues regarding used space, but they seem different from my issue. I'm using Samsung Galaxy Ace 3, not rooted. The device has 4 GB internal memory in total, and yet as shown in the image below, the used space plus system memory is more than 4 GB already.

And yet the system does not report being out of memory, presumably because it also detects that it still has 484 MB available. All existing apps are also running without any issue. However, despite this amount of available space, I currently cannot install anything new from the app store.

The other threads I've looked at generally recommends using *#9900# to delete some logs. I've tried that, but it has no effect. And in any case, for those other issues, it is mostly that the used space reported is higher than expected, but the available space and the sum still makes sense, which is not the case here. 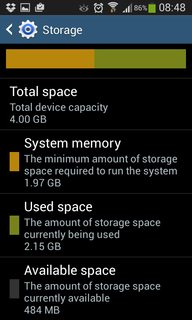 I would first try booting into stock recovery (look up how to do it because its device specific) and then using the volume buttons navigate the selection to wipe cache. Not wipe data! Then click the power button and wait for a while while it does its thing.

If that doesn't work go into app manager in settings and click on Google play and hit wipe data (do the same with Google play services). You will have to sign in again but it should fix the problem if it's a problem with the play store.

If that doesn't fix it, try clearing the data of the settings app (I'm pretty sure you can do this in the app manager in settings (it will wipe your settings)).

If nothing else works then backup your data using Helium Backup (if you want to keep your app data), Samsung Kies (you would probably have to use an older version), or just having all your stuff in the cloud) pictures, some games etc.), then go to settings and find where it says backup and reset (most likely the accounts tab) and click factory reset. Make sure if you used helium backup that you backed up backup to the cloud or an external SD card if you have one. Then follow the instructions and presto, it should be back to factory settings when it's done. If not you might want to look into flashing stock firmware with Odin or Kies (only as a last resort and with extreme caution).

Not the answer you're looking for? Browse other questions tagged 4.2-jelly-bean insufficient-memory or ask your own question.

4
HTC Incredible says SMS storage is full, but it isn't
0
16GB memory card, ive used 2GB and yet have 14GB of free space, how can i use that 14GB and why is it saying low of space on sd card???
1
Cleaning up Samsung S2 memory
4
Fix Google Play insufficient storage error without rooting my phone
4
Missing storage on Tesco Hudl 2
2
Available space is more than total space on the memory card
4
How to determine the amount of app space available?
0
"Insufficient storage - The device does not have enough space to download…" error only when downloading a language pack in Swiftkey