Facebook images appear small, and don't take up whole width of the screen: 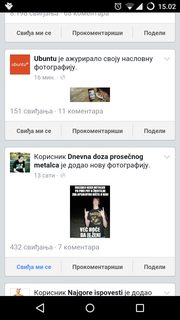 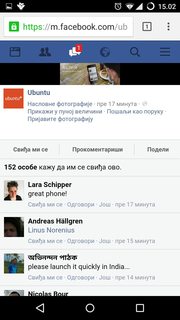 This problem was reproduced on both Xperia T and Xperia SP (both running CM12, both have HD screen), and also both on Chrome and default CM web browser.

This problem didn't occur on Xperia Mini (HVGA screen), and I don't have any issues with the desktop version either.

Is there any way to solve this?

Oh! I see.. You are using Cyanogen? Try using other browsers, including Opera Mobile, Mozilla Firefox, and Dolphin Browser.

So I just went around reading about the issue (of which I also experienced too), and realized it appears to be fixed already, at least for me.

To confirm again, I also quickly pulled my phone and tried viewing images on Facebook via Chrome, and they appeared nicely, not in small size.

Assuming the issue (which is likely a CSS issue) was reported some months ago, I am sure they'll be at it and tried to fix it.

My images appear alright though. Perhaps update to the latest Chrome on phone and it might solve it for you. I didn't even noticed it's been fixed until reading this question and going to explicitly try it out.

As a proof, see image attached. This is how images show on my Chrome when I visit Facebook for mobile, the m.facebook.com 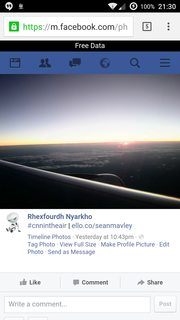 I've got two accounts the problem is only with one of them. The issue is with facebook trying out new stuff on select accounts. Nothing we can do from our phones

Not the answer you're looking for? Browse other questions tagged cyanogenmod chrome-for-android facebook sony-xperia or ask your own question.

2
How can I make my Droid2 push Facebook-originated contacts to Google?
2
Disable Touch Input Tracking Bubble on 4.4.2 CM 11
6
Facebook mobile website tries to open Messenger all the time
10
How can I prevent an application (Chrome) from opening another application (Google Play Store)?
17
How can I edit the URL of a home screen bookmark?
1
How can I view my facebook email address?
0
How to sync facebook contacts with ASUS ZenFone 5Z (Android 9)?