I am using NoRoot Firewall to block Internet access to some apps. It recently notified me that this/these app(s) are attempting to access the Internet: 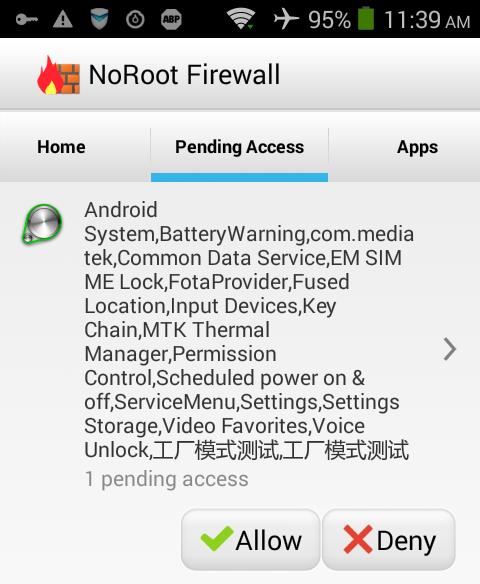 I'm not exactly sure why it needs to connect to the Internet. What will I miss if I block this from connecting to the Internet? I am using a Lenovo A536 phone. Android version is KitKat 4.4.2.

And I've just setup the ADB (Android Debug Bridge), connected my phone to my computer and ran the following command from a prompt:

...and it brings up the app on my phone. It's a menu with the following entries:

There's a wealth of information going on here. The "Network Utility" appears to be able to get/set a variety of attributes to include running local shell commands the user enters.

The bad thing about this is that you can't launch it normally using the various methods given to a user. The Launch button is grayed out in the interface under Manage Applications, for example. So if this isn't a tool for users then this must be for MediaTek themselves who made the processor.

Weighing in here only against "Common Data Service" I would say that if it's trying to reach out to the Internet then that's a bad thing. DENY.

As for "MTK Thermal" they're probably trying to send themselves temperature data, in theory, about the products in the field (or so we could hope). OUCH... look at the list of rights this program has. Again, DENY.

Things like Key Chain are worrisome in that you have to go fetch the public key in this sort of cryptography. But then again, what's to prevent them from uploading your credentials to some server out there? Hard to suggest in this case.

You can acces the common data service menu on any MTK device.

In engineer mode, go 1st tab to the right and click CDS information.

I am not an expert, but with CDS and MTK engineer mode you can use all kinds of backdoors.

I discovered it yesterday and I'm still searching for more information about it.

I think internet permission is required for the NETWORK UTILITY, where you have buttons with 'ping test', 'scan network', 'Wi-Fi API' and more.

You can probably mess your phone with it too, because in engineer mode you can even overclock your device and run shell commands.

I observed that on my device Lenovo A3000 log_other_mode increases proportionally with Switch Off time when charging, about 4 MB/hour. Important to know: I dampened the two micros with PlayDo..now they creating just continious 'cracks' like a geiger counter.

You can erase log_other_mode to its bone to 4 kB

There is no file size change, when switched on.

Not the answer you're looking for? Browse other questions tagged security privacy firewall or ask your own question.

10
What's the most complete way to erase all the data from my phone so it cannot be recovered?
2
How can I prevent my parents from tracking my Android phone or fake the location?
0
How to retrieve data from vault android app
1
How do I prevent unauthorized accession of my data when my phone is connected to the internet ?
13
Does full device encryption protect my data from Google and the government?
4
Permission system changes with Android 6.0: What are the implications for us users?
0
Does Android keep deleted photos and images from the phone?