Accented characters show up as Chinese characters in KitKat Cyanogenmod, had no issues in Jellybean

I have a few songs on my CyanogenMod KitKat device with accented characters in their names, but they keep showing up as Chinese characters. The screenshot below is of the music app Shuttle, but it also occurs on Apollo.

The same files posed no problems in jellybean cyanogenmod Android.

How to fix this? It's pretty annoying, and for some reason it doesn't affect all files, meaning that the music apps divide the same Racine Carrée album into Racine Carrée and the one below. 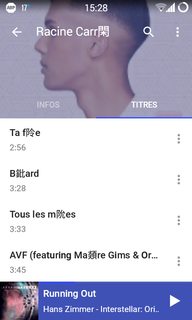 To rule out the ID3 tags being broken, I've copied and overwrote them directly from last.fm using mp3tag. In addition, the same files posed no problems in a different android phone running JellyBean Cyanogenmod and the same music apps.

So I reflashed a different version of the ROM manually using ClockWorkMod (I used the Cyanogenmod application on Windows before) and now it works. Unfortunately don't know the version numbers, so was either a ROM issue or an issue in the Cyanogenmod Windows application.

Not the answer you're looking for? Browse other questions tagged 4.4-kitkat localization user-interface or ask your own question.