Now I'll explain what I mean by "not seeing the warning bar". Regularly, the Settings > Data usage screen looks like this. 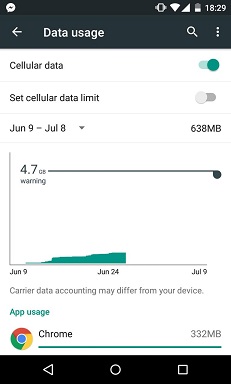 You can visibly see the warning bar, and that it is set to 4.7 GB.

Now, the Settings > Data usage screen on my device looks like this: 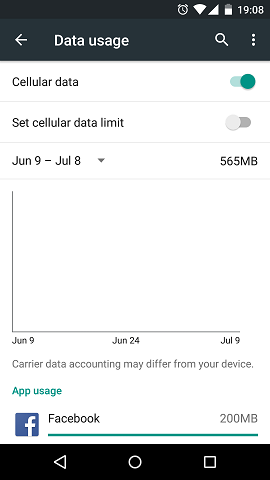 As you can see, there is no warning bar, and also no greenish graph that shows my recent cellular data usage.

How it happened, you ask? Well, it's a (more than a-) little silly. Usually, to change the warning bar, you hold on to it by pressing it, and then you slide up or down to increase or decrease the warning limit. I got a little bored I guess, pressed the warning bar, and started to continually raise it, as I was interested in the upper limit that Google enables. I took some time, but After getting to between 1.0E8 and 1.0E9 (it was hard to tell, since that number was rapidly increasing on my screen), it went back to 0, and started increasing from 0 again.

I was satisfied with my discovery, and wanted to try to stop the warning bar as close as possible before it resets to 0. After a few attempts where I came closer to achieving my goal, I accidentally lifted up my finger a bit while I was increasing the warning bar's limit. At 'normal' limits, nothing happens, and you can continue changing the limit afterwards. But when I lifted my finger up, my limit was in the range of tens of millions of GB. And when I lifted it in the middle of continually increasing the warning bar, the bar just disappeared, and with it, the graph.

My guess is that the bar was set so high, so the amounts of cellular data I use are insignificant compared to it, and that's way no graph is shown. But why can't I see the warning bar?

Anyway, this happened a few months ago, when my Android version was 5.0. I searched on this issue, but haven't found anyone else that encountered my problem. Also, before posting this question, I tried to reenact my scenario on another friend's Nexus 5 (running Android 5.1.1), to maybe gain more information about what happened on my device. A minute of experimenting later, his warning bar vanished too.

Any idea how can I resurrect the warning bar? (preferably without rooting the device or another 'drastic measure')

This is indeed a bug, or possibly, an overlook by Google, since the possibility for this bug to happen is very small. The bug occurs when you set the data limit above 700,000,000 GB (or 700 petabyte).

Note: This solution needs root access since it modifies a system file directly.

Update: this issue has been mitigated on Android 6.0.1. The maximum warning/limit bar is set to 1TB.

Without clamping, they can wrap around to negative values and cause all sorts of havok. 1TB ought to be enough for anyone: that's 3Mbps for a solid month.

4
Reasons for MMS to fail while sending?
0
Can't set data usage warning/limit
1
Data Usage Warning in ICS
4
Data usage slider missing in Android Lollipop
6
Preventing Android 7.0 Nougat from downloading updates over cellular data
4
How to get an overview of which app are allowed to background data for Android 7
0
Forbid phone from using Mobile Data