A few months ago a relative picked up a Samsung Galaxy Note 3 (SM-N9006) while in China. The price was low so he didn't think much of it. The phone looks genuine and when it boots up it shows the Samsung logo and all that.

While researching a problem with the preinstalled apps - see my other question here - and looking into rooting it, and/or installing a custom rom, it was made clear that I had to be careful to pick the right rom for the device. It was also pointed out that there are clones of these phones which complicates the problem.

So, my question is, how do I know if I have a genuine Samsung Note 3 or a cheap clone?

It was suggested that if a code in the dialer can NOT bring a debugging menu on screen then it is a clone. Well, the code worked for me. It showed a set of buttons for various hardware components like, wifi, flash, speakers etc. They did perform basic tests on a couple that I tried.

In contrast to Bruno's answer, it is a genuine Samsung Galaxy Note 3 produced for use in China and it's listed on Samsung's official website for model N9006 (in Chinese).

A rooting thread on XDA Forum also mentioned that it is "the most international version of the Note3 in China". Consider it as another Galaxy Note 3 variant, not as a fake clone.

It seems that your device uses a MediaTek MT6582 chip, as seen in this line of your device info:

There are no Samsung Galaxy flagship devices (e.g. Note / S devices) that use MediaTek chips. Samsung uses Qualcomm Snapdragon chips, its own Exynos chips, and the occasional Spreadtrum chip. MediaTek chips just don't deliver the level of performance that Samsung wants in their flagships. I'm afraid the device is a clone.

One way to confirm this is by going to the dialer app and typing *#0*#. On a genuine Samsung device, you'll be taken to a debugging menu right after you enter the last #.

After some more research and consideration, it does appear that your device is indeed genuine. The *#0*# test you did (and passed) further strengthens this claim. (I apologize for my previous answer.)

I have searched for the "SM-N9006" and it is a clone. The original Galaxy Note 3 models are:

Even though the debugging menu works, this model is fake. When searching for ROMs and Root, search for the "SM-N9006" model, then you'll find only the files made for this specific device.

Baseband: MT6582 this is definately a fake note 3, and i bet the sticker in the back of the phone is not like the regular sticker u find in all samsung, reason i say this is becasue MT6582 +++ are basebands they use to sell copy phones, if u search any china wholesale phones supplier you will see that they all use this baseband,,,,, while the SM-N9006 is a real and genuine samsung, it must have the correct basebands , not the MT6582

I would suggest you try using Phone Info Samsung. It is a very versatile app and gives you a lot of information on Samsung devices (many may come as a surprise). I have used it for four years on my previous devices. Developer has an active thread at XDA

Of particular concern to you in establishing whether it is a clone or original: 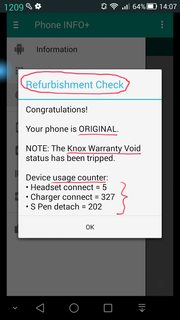 For reference and as a supplement to the answers above, one more evidence pointing to a fake clone: the Android version string says 4.4.2 but the build number is JSS15J which corresponds to Jelly Bean 4.3 (and an early build of that).

Add that to the baseband saying MT6582 (where genuine phones would say something like N9006ZCUBMI5, similar to the build number's second part), and clearly you have a fake.

Not the answer you're looking for? Browse other questions tagged samsung-galaxy-note-3 or ask your own question.

0
Can't Disable Chinese apps on Samsung Note 3
0
How to find out if note 10 lite is fake?