I had a few encounters with apps corrupting because part of their data was somehow stored into my SD Card. So I decided to move everything back into internal memory, format the SD Card, un-mount it and remove it physically.

However, after removing the SD Card and restarting my phone, I noticed some peculiar behaviour. 3 of my apps immediately started "storing" data into my SD Card, which no longer exists physically. Skype stores 12kb, Messenger 28kb and 9gag 92kb.

I haven't tried re-updating the corrupted apps, not sure if they would try to "store" into the non-existent SD Card as well. Any explanations or knowledge on this behaviour?

I'm using a Samsung Galaxy Note 2, below is a screenshot of my phone a few hours after removing my physical SD Card. The answer below further confuses me, as this "SD CARD" menu accessed through Settings > More > Application Manager was exactly what I used to manage which apps gets moved to the physical SD Card before I removed it. It remains the same after I mounted the SD Card back. Does this mean both emulated SD Card and physical SD Card information are combined in this menu? 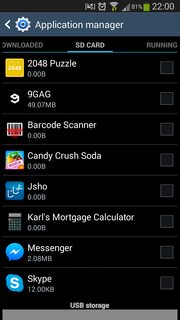 As I do not know your phone model and features, so tried to explain it with my phone's system (Micromax A089). In my phone there is two internal memories. One called "System Storage" and the other called "Phone Storage or SD Card" (Not the external SD card inserted by me). I think your apps data is storing in the "Inbuilt Phone Storage/SD Card" of you phone. Otherwise there is no explanation for this problem.

3
Nexus One crashes with 32GB SD card
3
Storing data on external SD Card in Android 4 (ICS) for Sony Xperia J?
3
Files with names with unicode characters get corrupted in SD Card
0
How can I (permanently) remove an sd card without harming apps on the device
1
Application manager: no SD card present but applications still listed under "SD CARD" and what is USB storage?
0
Samsung Tab A Marshmallow doesn't show contents on SD card