I am trying to create an exact copy of the filesystem on my android tablet on my PC.

I opened a shell on the device through adb and attempted to create a tarball of the whole root directory, but my root access was limited to 15 minutes so there was not enough time for completion.

Can anyone help here, either by showing me how to copy the whole root directory?

*Note that I do not want a backup .ab file, only and exact copy of the filesystem

It's unlikely that you need to copy the entirety of your tablet's storage in order to find a file from one application. Assuming the app you're using is this one, you should only need to check in /data/data/bn.ereader/. IIRC, you can pull that to your PC with adb pull /data/data/bn.ereader/ . (the dot may or may not be necessary).

The correct reference would point to our nandroid tag-wiki, as a Nandroid backup is what covers all content. However, this is only available via custom recoveries.

An alternative to that would be the dd command ("Disk Duplicator"1).

Disclosure: the following describes an application I wrote and maintain:

My tool Adebar is able to generate you dd scripts for all partitions your device holds, which you then can cross-check before execution. While doing that, Adebar tries to figure out what each partition is used for, so you won't end up just with cryptic names on the disk-images. To get to the content, you still had to figure the file system used on each partition (to be able to mount it as a Loop Device). But for the "worst case", you should be able to use these images to restore your device to the state it was in when you've created them (though I must admit I've never tried that yet). 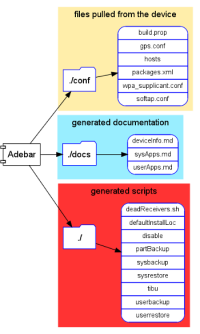 Adebar is mainly written in Bash version 4, and utilizes adb to communicate with the device. It definitely runs fine on Linux. I have not tested it on other systems, and so far got no feedback from users maybe having tried that.

1: careful: it's nick-named "Disk Destroyer", as if you use it the wrong way around (i.e. swap source and target), you can end up with a "disk without content"

Not the answer you're looking for? Browse other questions tagged adb root-access or ask your own question.

0
Unable to run su in adb shell on an Ubuntu machine
7
Need one-line adb shell su push & pull to access /data from Windows batch file
1
Temporary root Nexus 5 in adb shell to access a /data folder
4
adb pull - copy whole folder to computer
0
Pulling out app and data
0
Doing the equivalent of “adb pull”, but initiated from the Android device, not via adb