Use Bluetooth Headphones with Phone and Old Laptop

I am wondering if there is a way for me to play audio that is coming into the headphone jack on my phone out of my phone's bluetooth. I have bluetooth headphones that do not work with my old laptop but I could easily plug a male-male headphone cable from my computer into my phone. If I did this is there a way to make the sound coming out of my laptop be played over my phone's bluetooth?

Alternative solutions are also encouraged, however I thought this one was the most plausible.

I am not sure this will exactly fulfil your requirements. But i think USB Bluetooth Adapter Dongle would enable Bluetooth connectivity to your old laptop and you can play directly via laptop.

When you have easy access to your Bluetooth headphone from mobile then why don't you transfer audio files into your phone :-)

What I have understood from your question is : 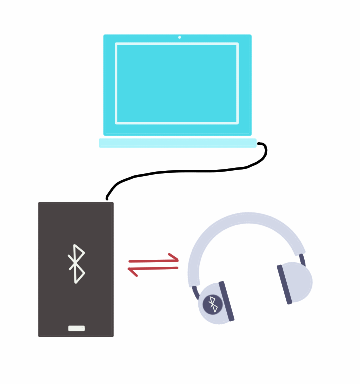 The solution that I used was to plug the male-male headphone cable mentioned in my question from my laptop speaker output into my microphone input jack of the same type. Then I ran an internet radio server program from the laptop on my LAN. The radio program played sound that was coming in from the microphone jack which was just the output of the speaker/headphone jack; in other words, I was playing the output of my speakers through the internet radio server. Then I played the sound out of my phone with an internet radio p

Works like a charm, though there is a slight (3 second) delay in the sound due to the internet radio server, but I would recommend doing it this way for anyone who needs to play sound out of their non-bluetooth enabled computer through bluetooth headphones if they have access to an Android phone.

Not the answer you're looking for? Browse other questions tagged bluetooth audio bluetooth-audio headphone-jack .

1
Is it possible to add an audio bluetooth profile to my phone?
5
How do I keep my headphone jack from disabling my bluetooth speakerphone in my car?
11
No audio out with headphones
0
three sets of headphones not plugging into brand new lg optimus g phone
0
Headphones compatible with phone only after switching the audio cable polarity
0
Can I connect android through headphone jack to car stereo's USB?
1
When no sound comes out of wired headphones connected to "USB to headphone adapter", how do you get the sound to work?
0
How to line in 1/8in cable on Samsung Galaxy 7