I would like modify default layout which will persist after I will make a hard reset.

Izzy opined it correctly here that the only sensible place for having factory home screen layout is the launcher's APK itself.

Since I don't own a Lenovo device let alone your specific model I used my MTK device running stock 4.2.1 as the testing ground. It has stock launcher (com.android.launcher).

About that thing called factory home screen layout -- a launcher usually has one or more databases inside its /data/data/.. directory, and one of that database has a table named favorites (name could differ among launchers but the idea is same). (See my answer for How can I manage “desktop” icons to know what I'm talking about.)

The default setting that you see is nothing but code in the APK creating database(s) from scratch and populating the favorites table with hard-coded entries (like "Contacts", "Phone", "Messages", "Chrome" at the dock).

E.g. See this code snippet from the source code of com.android.launcher: 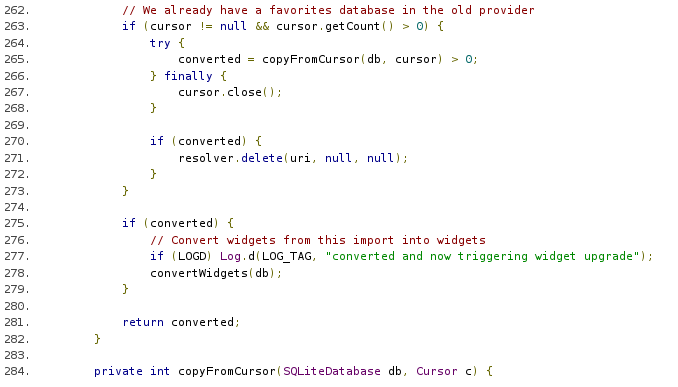 At this point, I didn't bother digging more to know, where does this favorites table or the related content is saved, since my conclusion is drawn from custom launchers as well who also have a different but a factory layout (clearly not saved outside the APK).

I would recommend taking a look at the source code (provided that you can find it first) of your default launcher, or extract the APK and dig under res folder. I found some interesting stuff under res/xml/.

Oh, if someone wants to experiment on OP's question then I suggest you do Clear Data from Settings → Apps → All apps → <Your Launcher> since it would have the same effect as doing a factory reset (not Hard reset).

Not the answer you're looking for? Browse other questions tagged screen file-system rom home-screen system-apps or ask your own question.

2
How can I manage "desktop" icons
0
Where is the layout file for the Sony Xperia launcher?

10
Dashboard/Home Screen icons take up to 10 seconds to load after pressing the Home button
3
How to make custom apps to appear by default in the lower dock panel in my custom ROM
2
I modified vold.fstab and lost access to my SD card
2
Change layout of software buttons on home screen
0
Where is the layout file for the Sony Xperia launcher?
0
How is the default launcher set after a factory reset