How do I manage users on my HTC One with Android 5?

I've found two documented ways to do it:

In settings, there is “Accounts & sync” element, but it looks like it handles online accounts used by different applications, making it possible, for example, to associate my Google account with the device. This is how “Add an account” looks like: 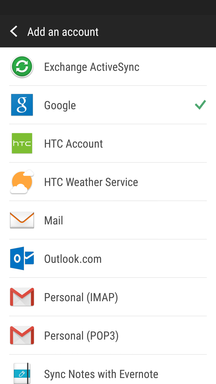 What am I doing wrong? How can I create users?

This might not be a solution1 for your device and situation, but explaining the issue and possible help others working around it:

When it was "invented" with 4.2-jelly-bean, the multi-user feature was intended for tablets only. One of the reasons behind that was e.g. what to do with incoming calls and SMSs: to what user should those belong? Does the (one-and-only) SIM belong to the primary user? So what shall we do when (one of) the secondary user(s) is currently logged-in and working?

"It is not at all clear how it should work on a phone, specifically with respect to SMS and phone calls," writes Dan Morrill, Google Engineer and a regular on the popular /r/Android subreddit

With 5.0-lollipop this seems to have slightly changed, as you've pointed out in a comment on your question:

[…] When Google released Android 4.2 it included multiple user accounts for tablets; however, smartphone users were left in the cold. This has now changed.

And the official pages even state, without explicitly restricting that to any manufacturer:

Still, not all manufacturers decided to "jump that train". Some simply "patched out" the corresponding menu entries from the settings app (in which case you can use e.g. Activity Launcher to reveal and use it), others removed that functionality altogether (seemingly the case with your device). In the latter case, there's nothing you can do without rooting your device.1

1: solutions in your case require the device to be rooted; then follow up Arielle's answer

0
Is it possible to enable vendor-disabled user accounts in rooted device with Android 6.0?

16
Is there a way to switch Android users from the command line?
31
Is there a way to remove the Guest account?
0
Android 5.0+ multi-user feature: how detailed can you set user restrictions?
0
Create an unprivilleged user in android