Why don't the percentages on the battery chart add up to anywhere near 100%? [duplicate]

I'm trying to figure out what's using my battery life by looking at the battery page in Settings. (I don't know if this screen is Cyanogen specific, or a stock Android feature.) Here's a recent screenshot of that page: 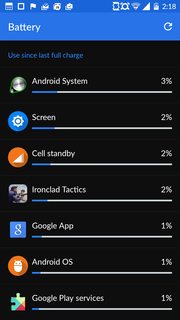 Use since last full charge:

(It may not be clear from the screenshot, but that's the end of the list: there's nothing off-screen.) I don't know whether those percentages are supposed to add up to 100% (logical) or to 33% (the amount of battery used so far), but either way, they actually add up to 12%. No amount of rounding error can explain that. At best, 2/3 of my battery usage is totally unaccounted for.

This is a common occurrence. I have another screenshot where my battery level is 18%, but the sum of all the used apps is only 44%.

What could be using up so much battery that wouldn't show on this list? Or alternately, could some battery usage pattern could cause this screen to grossly underestimate usage of a particular app? Or could a faulty battery, that drains more quickly than it should for a given load, cause this?

Since you have last charged your device, its displaying the ratio [usage time/time since charged] * 100 of that service It might be that you didnt use any service and the screen was off most of the time If you use many apps simultaneously (consider using 4 apps at a time) using these all the time till your phone gets discharged will show the time for these apps to be 100% but if you add these %ages for all the apps it will be greater than 100

Not the answer you're looking for? Browse other questions tagged cyanogenmod battery-life oneplus-one or ask your own question.

7
Why has my GSIII's battery life dropped from 50-60 hours to 16 hours?
4
“Phone” item using 10-15% of Battery Life
0
Samsung Galaxy s3 Battery life
1
I have three batteries used in succession and all new. The problem is the same. I supect apps are in use when not needed
19
Battery percentages per app nowhere near total
5
Why Does My Samsung Note 4 Shut Off When it Reaches Around 20% Battery Life?
0
What do the app “usage” times in battery settings represent, exactly?
0
Is there any way to mass background restrict app battery usage?