How do I change the naming scheme of Silent Camera to human readable form?

I have very good reasons not to want the shutter sound when taking photos. I have two camera apps that both have it, one came with the system and is called Camera. I deleted the other one, so I will call it xCamera from now on.

I therefore downloaded Silent Camera, which I found out about in an answer to some question over here. Its naming scheme simply makes no sense. Now Camera used to name photos by a yyyy-mm-dd-hh-mm-ss.jpg scheme, where:

xCamera had mostly the same scheme, without the dashes. Silent Camera has names like 1438263708113.jpg, which really seems just like a random sequence of numbers.

Now I sometimes need the date and, especially, the time a photo was taken for my own good reasons. You will probably say, "Well the computer can tell you that, it remembers the Date Modified and similar info, right?". Yes. Trouble is, Android File Transfer is somewhat buggy, and sometimes (in a pretty erratic manner) suddenly stops letting me drag-and-drop files to the Finder, i.e. as I drag the files, the AFT window comes along, which of course prevents copying.

Also, moving files between directories of the phone is almost always impossible. That is another story, but the first point - problems copying - leads me to AirDroid. Unfortunately, this leads to losing the date-and-time info, which is sometimes pretty valuable to me. So I either lose that info or rename all photos to include the name Camera would give the photo, were it to take that photo.

Bottom line is: is there a way to change the naming scheme of Silent Camera? And if so, what is it?

Note: I really don't want to root my phone

This solution is independent of any Camera app, and is tested on CM12 (Lollipop 5.0.2) and should work on other Lollipop ROMs as well.

While it seems that the question is about changing the naming scheme of Silent Camera app, the actual goal is to use an app that is free from shutter sounds. OP seems to have found an another app (see this answer) to suit the needs. But I would like to give a solution which would enable you to use any choice of Camera app(s), irrespective of whether it silences shutter sound!

All I'm going to do is activate Zen mode aka Do not Disturb mode which would kill Notification volume, and Ring volume. Don't worry! This mode would automatically switch to user defined sound settings as soon as you switch from Camera app to any other app (including your Launcher app).

Now, launch your Camera app that you chose in the aforesaid step 6, and you would find that it is not making shutter sounds at all. Close the app, and you would see that your sound settings returned back immediately.

I've successfully tested this solution on default Camera app, Google Camera, and Camera FV-5. All tested individually as well as in group.

You can bypass the need of root permissions (if you barely reboot your device) by running loop-back adb in wireless mode. See step 2 in Instructions here to understand the loop-back ADB usage, and then use it with the aforementioned steps.

To sum up @Firelord's comments:

Point 4 is thus my choice. The only annoying thing is that the app created its own saving folder. So I found a way to change its path. It's easy: tap the gear on the bottom-left corner for Settings, tap Save to, find your favorite directory and hit OK. NOte that the app won't let you create a new folder, so for that you will have to use another app. I personally used ES File Explorer, but I wouldn't install it just for that. Unless it's the only option (besides installing another app just for that which is equivalent :P).

Update: Following Firelord's comment to this answer, this app seems to be the one I downloaded. I found it on Play Store by looking for silent camera, and it was the first result given. More precisely: 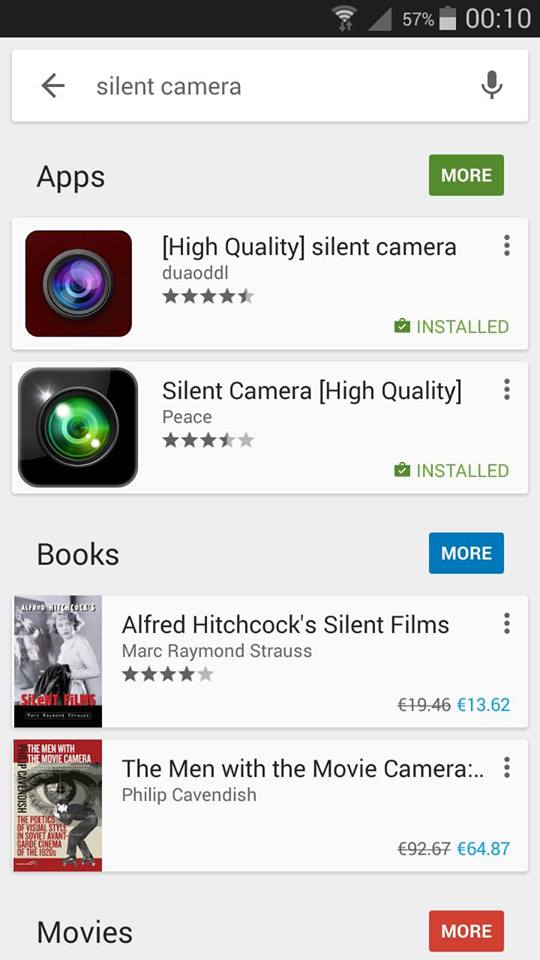 Update 2: It also seems there is a way of silencing any Camera. Firelord managed it. I won't try it because I chose point 3, and because it seems to involve some programming at which I am a complete noob -- unless it's LaTeX programming, where I know quite a bit :).

Note: This is a partial answer, and might get completed in future.

This answer directly focuses upon changing the name of the images created by Silent Camera app. For an alternative approach to the question, see this answer.

We know that the name of the images is not a random number but Unix Time (as mentioned here). All we have to do is create and run a script to convert those names into date-time-stamp.

I've written a very basic script to do that. (Partial credit goes to many Q/A on SO, Unix.SE, and various sites on the web.)

(Readers: backticks are important in the pre-formatted text, so please don't edit them out.)

The reason I said this is a partial answer is because:

The solution is easy:

That's it for now!

1
How can I modify files on a remote computer over wifi/3g from my Android phone/tablet?
0
My camera was hidden and I lose the icon. how can I get the icon once again?
3
How to change the density (DPI) for specific applications?
10
Does an Android Emulator exist which works with every possible app?
0
"A Better Camera Unlocked" question
1
How to compute all space taken up by an app and its associated files
0
How do I create fast backup of camera photos to cloud storage
1
How to use "Automate" Android App to have newly taken photo is saved into DCIM/whatever folder not DCIM/Camera folder?