How to prevent brightness from going to full when the battery low popup appears?

Whenever the "battery low" popup appears in my tablet, the brightness goes to full. This makes no sense because the brightness should be decreased to the minimum instead of going to the maximum, as battery is low. This is also annoying as I have to lower the brightness.

I've looked in the settings to disable this but found no such option.

So, How do I prevent brightness from going 100% when the battery low popup appears?

I am running Android Kitkat 4.4.2 and my tablet is not rooted.

Automation is the preferred option, or rather only option in this case, since Android OS does not offer any settings for requirements quoted.

Many apps are available. I prefer using MacroDroid , since it is free (upto 5 macros) and easy to learn.

A macro consists of the following (elaborating on app help):

Event(s) occurring on the device (e.g incoming SMS, headphones inserted). Multiple triggers are evaluated to logical (OR)- meaning, any of the trigger conditions met would fire macro

An action that the device can perform (e.g. set wallpaper, take picture)

These features prevent app(s) to be active when the device is not awake, conserving battery. May not be pertinent to your phone but adding this as a general precaution.

Battery Level → decreases to → (choose percentage by sliding scale or 15 %)

Macro doesn't run at all- In most cases, it is due to correct system settings not being applied. To verify this, from the 3 button help option on the main app interface select System Log and see if your macro had run when it was triggered. If your macro name doesn't figure, recheck system settings

Note: the solution below requires your Android to be rooted.

I believe that automation without root wouldn't straightly deal with the issue, since it is not changing or overriding anything, but doing its own stuff over the existing changes. I was about to post on similar lines until I realized that the key to the solution is a file named max_brightness, a file under /sys, hence a part of Linux kernel and directly managed by it. I found that setting the brightness limit in that file is the best way to go here. You may disagree with a better solution.

I noticed that once your custom maximum brightness is set, neither Android nor an app was able to set brightness beyond that custom level unless they changed the content of that file, which often an app has no reason to and none of them changed either. Besides, the file is owned by root and is part of group root, so any app or even system_server would require root privilege to make changes into that file.

Finding that file is bit tricky. In my MTK device with Android 4.2, that file appears to be under /sys/devices/platform/leds-mt65xx/leds/lcd-backlight/.

In my Qualcomm device with Android 5.0.2 and above, the file appeared to be in /sys/devices/mdp.0/qcom,mdss_fb_primary.168/leds/lcd-backlight/.

I assume that the best way to find that file is to run a search query (setup adb for that), such as:

In my Qualcomm device, the output it gives is:

The location where lcd-backlight is mentioned was the only one that made sense to me and this is how I found the file in my device. Don't you worry asking about others. I attempted changing the brightness of the screen and looked for the changes in the file named brightness (also located under those said locations). None of them reflected the correct output other than the one at /sys/devices/mdp.0/qcom,mdss_fb_primary.168/leds/lcd-backlight.

Only for demonstration, try setting a limit in max_brightness

Note that the maximum value in max_brightness is often found to be 255 and the brightness ranges from 0-255. Often, not always true, that is. And fear not from setting the limit to 0. It would cause the screen not to lit until you revert the changes or restart the device.

Find a limit which would not disturb you in your sleep or drains the battery heavily when battery runs low on juice.

For automation, use any automation app that can run a command with root privilege and when the context of your preferred trigger is met. I recommend a time based trigger.

As you would've guessed, you would have to setup two profiles for every app. One to setup a limit and the other to set the maximum brightness to the default you're used to.

I would like you to keep this under consideration that using a low battery or 100% battery trigger would defeat the purpose of this answer, which is to override the changes Android want to make. As an example, if you setup LIMIT to 0 whenever the battery reaches 100%, what would happen is your Android would lit the screen to maximum as usual and in few milliseconds (you read correctly) your automation app would run and set the limit. Your sleep may get interrupted in those milliseconds.

In an another situation, when low battery intent is broadcasted by system, Cool Guy's tablet may end up with a screen lit to maximum and in few milliseconds, the brightness would fall back to LIMIT.

The workaround is to set up the battery level to 16 or more for battery low trigger and 99 or less for full battery charge.

Try using an app called Screen filter. CAUTION: Do not set the brightness below 17 because you cant see anything. You can text at nighy n the person sitting next to you wont even see

Disclaimer: Not tested on Lollipop as my device is NOT on Lollipop, my device doesn't brighten up screen on full charge. Would request OP or Samsung S4 galaxy users to confirm. Theoretically should work

Firelord in his solution has highlighted a point that my earlier solution entails that the screen is lit for milli seconds that could possibly cause a disturbance to OP. However, his method involves rooting and identifying the file to change the maximum brightness levels

IMO, this approach lacks universality, since it is applicable to those who are rooted and have the understanding to identify the file to change brightness levels (technical merit apart). Hence, I am presenting an alternate solution which provides similar results but without rooting

Darker can lower your screen brightness to extremely low levels, to help prevent eyestrain during the night 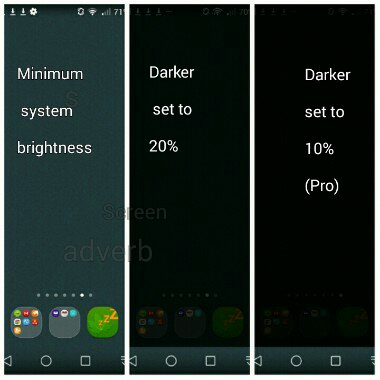 Not the answer you're looking for? Browse other questions tagged 4.4-kitkat charging screen-brightness .

20
Screen turns off during call due to problem with proximity sensor - Xperia Z3 compact
13
Is there a way to exclude an app from Doze?
8
How to set one Ringtone for Contacts and another for non contacts?
8
Is there a way to enable the ringer/notification sounds only when using headphones?
2
How to prevent brightness when battery reaches high?
5
How to turn off the beep sound when pressing volume up/down buttons on Lenovo s660?
3
Custom ring tone for callers who block their caller ID?
2
"Priority only" as default mode - Marshmallow
3
How to launch app when phone is connected to a specific Qi wireless charger?
2
How can I configure WhatsApp so that an email is sent to me when someone sends me a message on WhatsApp?
See more linked questions

0
Battery Status problem
1
Can I change the *maximum* brightness from a system file/apk?
0
Battery drains very quickly on Samsung Galaxy S5
3
Why does video screen get brighter and how to prevent it?
2
How to prevent brightness when battery reaches high?
4
How can I tell if I need to replace my battery?
1
Does using brightness dimmer (screen filter) really save battery?
3
How do I change the Battery Percentage that corresponds to a Voltage in Android