Before I begin, I've searched quite a lot and haven't been able to find exactly what I'm looking for.

I have a rooted Nexus 5 with Kali Nethunter installed. It's very easy to capture all network traffic from my phone, however I would like to capture it using monitor/promiscuous mode. In other words, simply the traffic of anyone who is connected to my internet using my phone

So far, I've only been able to see what my own network activity, so is it possible to capture, let's say my laptop's network traffic using my phone if they're on the same network.

And by this, I don't mean to create a hotspot on my phone, make my laptop connect to it and capture it then.

hope I've made it clear enough.

My question isn't limited to Nexus 5. Any android supported phone which may be able to achieve this could work.

Cyanogenmod provides you with an option to build your own Cyanogen-build and integrated kernel building. With this you can compile an compatible kernel for your phone with desirable features. Here's a post that walks you through the process.

Kali NetHunter won't allow you to use inbuilt WiFi card to perform packet capture.
Moreover most mobile WiFi cards does not support promiscuous/monitor mode.
You need to use external WiFi card(such as Alfa card/Tp-link Wln722n),
connect to USB OTG on Nexus 5 for packet injection, then you're all set.

No need to install Kali NetHunter/any custom ROM.
Android PCAP capture app lets user to capture WiFi packets.
It is developed by Kismet wireless.
It does not require Root previliges even.

There's support only for Broadcom WiFi chipsets from this group. There's bcmon android app to capture network (works on stock but rooted-android). Only supported chipset (firmwares) are old BCM4329 and BCM4330 and there's been no development on official bcmon blog since July 2013. Other firmwares you may have to compile the drivers for it. You may have to compile the drivers manually for it.
Nexus 7(2012), Samsung galaxy S2 have BCM4330 whose internal wifi is capable of monitor mode. Also Motorola Xoom, Galaxy Tab, Nexus S, Nexus One have BCM4329 and known to support bcmon.

And then I started searching firwares and drivers for Samsung galaxy S2 and started testing with this old phone. 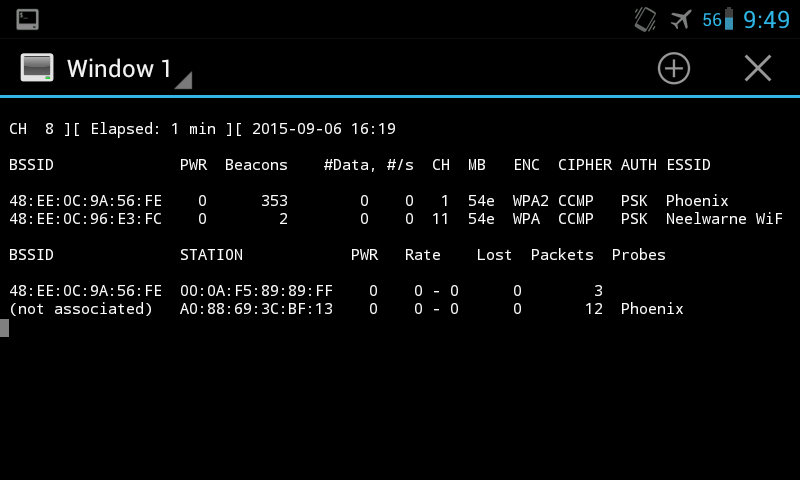 Not the answer you're looking for? Browse other questions tagged wi-fi rooting root-access networking or ask your own question.

6
How to check if an android device has a wireless card that supports promiscuous or monitor mode?
3
Accessing Tor on Android device via a virtual wifi network
1
Traffic analysis and inconsistent results on Nexus One
5
Mounting an USB wireless adapter to a Nexus 4
2
How to redirect all web requests from hosts connected to hotspot to a local web server?
0
Can all android devices be rooted?
1
Some applications won't connect to the internet via 3G after rooting my phone