I am using CyanogenMod on my Android devices without Google Apps (and consequently without the Play Store). Nevertheless, I have a Google account bound to my device ID and have purchased various apps with the account.

Are there any currently working ways of downloading purchased APK files without using the Play Store-App on the device itself?

(Similar questions I found on this site suggest outdated answers)

There are multiple possibilities for this. One is using the appropriate counter-parts from the µg project (pronounced "micro-G"; formerly known as NOGAPPS) – in this case Phonesky (the inofficial Google PlayStore Client) or BlankStore (same thing, basically). Each of these two would run directly on the device, no Google-Apps required (hence the name "NOGAPPS", or "micro-G(oogle)"). Check with FakeGApps, which has a good ReadMe to get you started with that on a Google-free device. 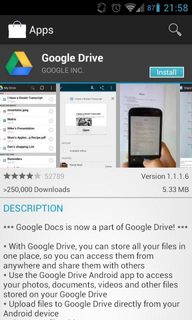 Then there's Raccoon, available for Linux, Mac, and Windows, see the article Raccoon is a desktop downloader for Google Play Store apps at AndroidCommunity. Raccoon can be used on your computer to download the APKs, which you then would need to install by other means (adb install, or copy to your Android device and manually install there). Raccoon also keeps track of updates available for apps you "watch". I'm not sure if it can deal with apps already bought (didn't give it a try yet), but as it works with your normal GPlay credentials, it should. As with BlankStore, just the process of bying apps will not be available – but you can do that using the Google Playstore with your web browser. 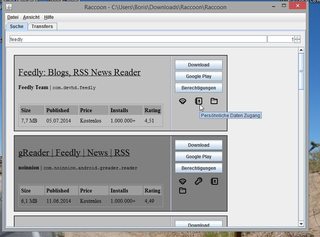 With payed apps, trouble often is they use Google's license service to verify their "legitimacy". That would fail with Raccoon if you've got neither GApps nor NOGAPPS on your device. BlankStore and Phonesky, on the other hand, were reported to take care of that as well (though I've experienced BlankStore to fail with payed apps recently, which might be caused by some API changes on Google's end – I didn't dig deeper into that yet, so I cannot tell for sure, but I don't seem to be the only one).

Not the answer you're looking for? Browse other questions tagged google-play-store apk downloading paid-apps .

85
How can I download an APK file from the Play Store?
1
How do I download app's APK file from Market to my desktop computer?
1
Where are the libraries/dependencies for an Android app stored on the file system?
0
Can I Change My Device Info For Reach Another Version of an App On Play Store?

0
"invalid download uri" from Play Store on a Huawei phone
9
Minimal .apks for play store
1
How to download OBB files without using the Chrome/Firefox Extension?
1
Can I download an apk of an app I have payed for?
2
Can't download from Play Store - need new ideas to try
3
How to copy apk and data from old device to new device