I have a bit annoying problem. My Android 4.2 Jelly Bean automatically corrects volume down every few minutes. It is rather annoying than a problem.

I tried to find and switch off this functionality, but i was not successful.

Can somebody help me where i can find it and switch it off?

Tablet is not rooted. This occure when I listen Google Play, when I am not listening to music, when i have switched on or off Google Play. It happenes about every 10 minutes or something like that. It happens when plugged headphones via connector or without it. Bluetooth not tested.

Possible reasons to why the problem occurs;

Power saving feature (both inherent or acquired from third-party applications.

Some users suggest that this can be attributed to a power saving feature in the ROM.

As soon as it hits 30% battery and that activates, it changes all my volume settings. Volume settings auto-adjust themselves?

It was observed that when doing an action that generates sound (i.e driving, running etc), the mic input in the head phones, this extra sound is somewhere compensated by a reduction in device volume.

Another possible theory to explain this scenario was described by one user:

This problem has been noted by many users as a major bug in lollipop and I think earlier versions could have been vitims too. Not only is the Galaxy S4 model affected by this bug, infact other device models e.g LG, Galaxy S3 etc running lollipop version seems to be affected as well.

I found the problem finally. I found that if I use headphones that have a mic built in, it was the cause of the problem. Luckily my headphones came with a lead that could be unplugged from the headphones so I bought a new jack lead with no inbuilt mic and ii fixed the problem.

Another user was affirmative with this workaround:

Long story short, try not to use headphones with an inbuilt mic/volume control esp. while exercising (I find this is often the time this occurs).

Try booting your device in Safe Mode. If the problem stops, there is definitely a third-party app triggering it.

However, if the problem is still there, it might be the Android software itself triggering the issue or a hardware-related fault. Simply delete the app that you suspect has compatibility issues with your music player.

When the above solutions do not work, go to Recovery Mode and select Factory Reset. This will totally restore your phone to its factory settings. It will completely wipe all your stored files though, so remember to backup your data prior to this. You also wipe the cache partition in Recovery Mode if even Factory Reset fails.

If the problem is due to an OS version update, wait for another OTA update that contains a fix from your unit’s carrier or manufacturer. When there are no updates or updates fail to fix the issue, you can root and flash your phone, then, install a custom ROM that will remove the issue. This is very risky though, so do your research about the process first or seek help from a technician.

Another workaround is using automation. You can try using Tasker ($2.99 but available as a trial version for 7 fays) Basically here, you want to set the media volume at constant level preferably when playing music or other media:

Here is a workaround using Tasker:

Go to the Task tab

Link the Task to the profile

Explanation: When an media application is opened,acheck is made if the volume is set to a defined level (i.e 10 in this case), if not equal to ths value then a Taskis processed to adjust the volume to that level and make sure its constant

Revised earlier solution , optimizing it and reducing it to a single macro - keep it simple (instead of two). This works fine - shouldn't take you more than 20 minutes to set up for test (even if you haven't ever used this app )

My solution is towards providing a simple , tested fix to the problem using automation

I prefer using MacroDroid , since it is free (upto 5 macros) and easy to learn. Install the app , grant it permissions requested and you are good to go.

Since I don't have this problem with Google Play Music on my Moto X Play, I tested by by pressing Vol up and Vol down keys ( to simulate changes in volume ) but the player volume remained at predetermined level. I have tested it extensively , since my earlier solution 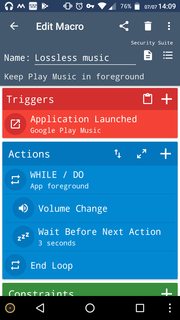 Macro : Lossless Music ( named by me - name it whatever )

This macro does fixing the predetermined level, polling every 3 seconds and ensuring that volume stays there

( When Google Play Music is launched , actions below happen )

This creates a while / do loop wherein we want something to be done when Google Play Music is in foreground. You see now a WHILE / DO - End Loop created . Tap the End Loop and you will get a pop up Add action above. Tap that and add actions below

Save and you are done !

One possibility (Tested with OnePlus 5): The Equalizer.

Turn off the equalizer in System Settings, or at least the "Limiter".

To balance music volumes and reduce sudden bursts, the equalizer automatically raises volume on quieter parts of a music and turns down volume at bursts. This causes troubles frequently so I don't like it.

P.S. Someone told me to turn off equalizer in GPM but I can't find such a setting so I'm not adding it here.

Not the answer you're looking for? Browse other questions tagged 4.2-jelly-bean volume-control volume or ask your own question.

4
Motorola Triumph changes Volume between Songs or with Notifications
5
Siri-like answers in Google Voice Search on 4.2
8
Nexus 7 Incredibly Slow
3
Volume Limiter for android?
0
Meaning of lines in Charging History details view in 4.2.2 Jelly Bean
1
Why does the in-call volume change on its own on my Samsung Galaxy S3?
5
Is there a way to set a default volume for different bluetooth connections?