Space deleted but not reclaimed for re-use

I'm using Nexus 5. In the following image, you can see that I have total space of 12.55GB. Apps in the dark green bar on the left taking up more than 1/3 of that with 4.93GB. The light gray "Available" which is nearly the same size is listed as 498MB -- that's much less.

If this were actually 498MB, that would be a tiny sliver, not nearly 1/3 of the storage space.

I've deleted a ton of pictures and apps from my device, basically bare-bones and otherwise not usable even to run the next OTA update. But no matter what I delete the space is never reclaimed on the device: 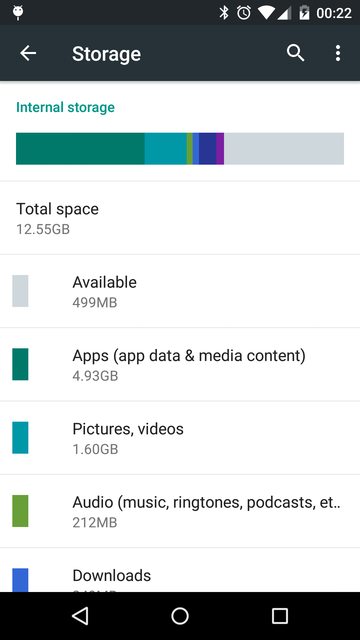 Why is this happening and how can I fix it?

So maybe the space I cannot recover is controlled by the root user and I can't delete it as a normal user?

Is it possible to restore my ability to use my disk space without wiping my data?

The update from 4 to 5 disabled my access to clockwork mod, but did not remove Clockwork or prevent it from doing whatever automatic recovery process I had set. So, that was building in the background until I deleted it.

12
How can I get rid of the low disk space notification?
6
OTA Update on a rooted Nexus5 with Custom Recovery and Kernel
2
Shred an internal or system partition
1
Inexplicable lack of internal storage on Asus TF701T tablet
4
Missing space on internal storage
3
Android du and df very different: File System Corrupted?