Everything seems up to date. But I don't have the options to use Ok Google on other screens/apps. And the hotword won't even work in the app itself. 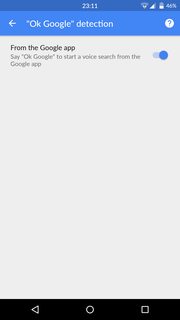 I had the same issue with my device as well.

Not the answer you're looking for? Browse other questions tagged cyanogenmod google ok-google or ask your own question.

0
CM 10.2 with Google Apps version 20130813 won't download from Play Store
0
Can I get rid of “Sound Search for Google Play”?
2
Flashing up from 5.0 to 5.1 with CM12 nightlies?
4
How to troubleshoot “okay google everywhere” missing from voice settings?
3
Unable to access Play Store after CM12.1 upgrade
0
Google play store is missing after installing Cyanogenmod 12.1
0
“Android Pay is unavailable” on Note 2 running CM 12.1
1
S4 CM 12.1 Problem with GApps