How can I find the name of the Kernel and its version that is running in my phone?

I had flashed Android 6.0 Marshmallow in My Nexus 5. As a part of a rooting process, I had to flash the kernel to allow SU binary to work.

All is fine and root works well.

Kernel is a intangible software component. How can I know the name and version of the kernel that I am using on my phone after installing it? I mean if I do not remember from where I downloaded the kernel or do not have the its ZIP file, are there any means with which I can find the kernel's name and its version?

Do one thing, download an app called “terminal emulator” and open that terminal and invoke this command:

It will show you your kernel version, and its name and other details.

Unless Marshmallow has some unnecessary native changes, you should be able to see the kernel version in many Android releases from Settings → About phone. 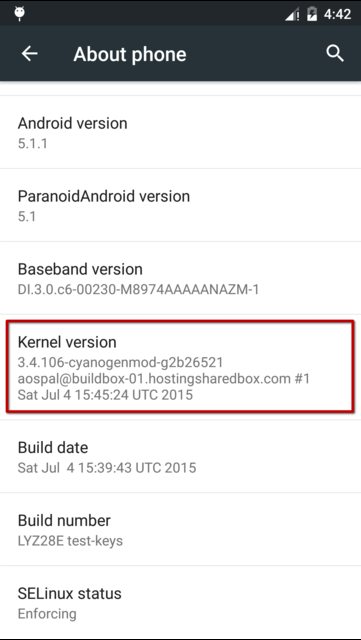 A command line way other than uname -a can be:

Output in my case is:

Provided that you've root access or command executed using adb dumpstate can also show you what you want, but the rest of the output would be overwhelming.

Another alternative can be an app which can show system details, such as Elixir 2 or Droid Hardware Info. 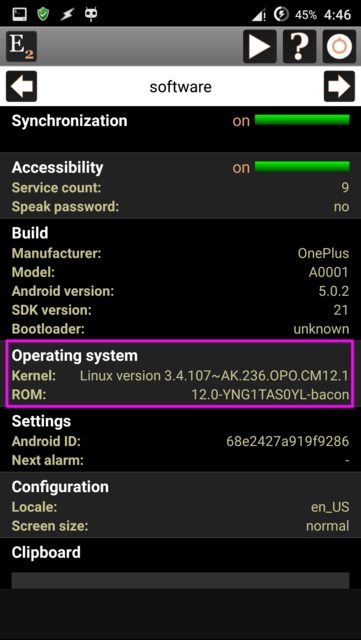 Not the answer you're looking for? Browse other questions tagged nexus-5 kernel 6.0-marshmallow z4root .

0
Can one determine the kernel version of a Samsung device from the Android version?
8
Boot loop after flashing Android 6.0 Marshmallow on Nexus 5
7
Battery Stats Are Vastly Incorrect
2
How to upgrade Android kernel version
1
"Viper4android" removed "Audiofx" app permanently
0
Restore Android 6 on Moto G (2nd Gen) without adb?
1
Soft-Bricked Samsung Galaxy S5 - "Set Warranty Bit: Kernel"
4
Adobe Reader -"This file could not be accessed Check the location or the network and try again."