I accidentally deleted the google shortcut widget which shows all the google apps on my x play android lollipop how do i get it back?

It isn't a widget, but just a folder where app shortcuts are put together by default. You can create them by just "drag and drop" an icon over another icon and create a folder. Then you can rename it to "Google" or an app category or whatever you like. Look at the screenshots for a more clear understanding on how to bring back the Folder,

Here's the default folder named Google with Google apps inside it, 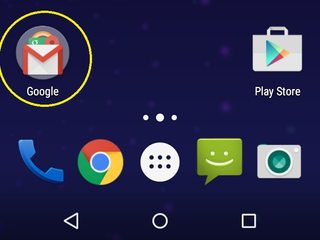 Pull Google apps from your Menu drawer by long pressing it and pasting on your home screen. Now merge these two app icons to create a folder.

After merging the two icons it will be displayed as a folder named "Unnamed folder". You can press and edit it's name to "Google". 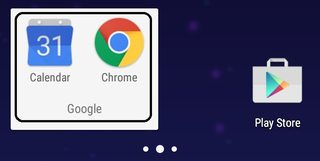 Finally, after you put all your Google apps into the folder, it would look like this, 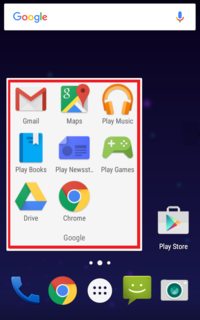 You can get it by long pressing on the home screen - -> Shortcut - - > Google Widget. hope that helps.

Not the answer you're looking for? Browse other questions tagged 5.0-lollipop default-applications moto-x or ask your own question.

1
How can I put the Google Now widget on the lockscreen with Andoid L?
1
“This app won't run without Google Play Services which are missing from your phone” on Samsung Galaxy S2
0
Booting into ClockworkMod
6
Which system service apps could I disable to protect my privacy
0
CAN i reinstall the system apps which i have deleteed accidently during rooting?