Does an Android Emulator exist which works with every possible app?

I'd like to install a specific free android app, which works under different Android smartphones (minimal requirements of Android 4.0):

The freely available app is called PostCard Creator and useful to send Postcards in Switzerland where I live. It works under different physical android smartphones but not with all independent of the android version.

I've tried different free Android Emulators for a lot of hours under Windows but without success.

For http://www.manymo.com I've used the legal APK Downloader (https://chrome.google.com/webstore/detail/apk-downloader/cgihflhdpokeobcfimliamffejfnmfii) to download the APK file which I uploaded here: http://www.file-upload.net/download-10976262/ch.post.it.pcc.apk.html

The app perfectly runs in my physical smartphone with version 4.2.2. Based on an email request, the app doesn't depend on the android version. The developer says, it does not work with all devices. I've also tested the app compatibility online. The result was good.

I would be very glad if someone succeeded to use the app PostCard creator on a Windows plattform. Does someone get it?

(Alternatively, if you also don't succeed with Android emulators, I would be very happy if you know a workable way to emulate the PostCard Creator app file from the Itunes App Store, because it works also on my Iphone for free)

There is a long output, so I only get the last lines from cmd.exe console which I uploaded here

This can happen for the following reasons:

For your case, I suspect either 2 or 4 is the culprit. Try:

The reason being most phones or other devices with Android from the factory have these Google Apps(GAPPs) preinstalled as the OEMs kicense it from Google, but any custom distribution of Android initially lacks these as their developers either can not or do not license these GAPPs from Google. Emulators fall into the second, custom, category.

From analyzing the logcat file, I can conclude that the Postcard Creator app actively checks for a touch-capable screen on the device (which any emulator other than the SDK one or Bluestacks/Youwave will fail). In the given case, this is probably what is causing the app to crash. Also, the app is loading a native library, libxwalkcore.so, which is succeeded by a Fatal Signal 11 (SIGSEGV) from the Dalvik VM library, which probably indicates a segment fault (segfault), which force-kills the app process. There is also an error in taking a screenshot of the activity, which is probably related to the one that Android displays for the recent apps, and understandable as the app has crashed.

I came across this today: ConsoleOS (note that this isn't an emulator, it's rather like running a Linux distro in dual-boot mode on a PC with Windows, with rapid switching (they say as little as 10s) between them).

This claims to be an Android all-in-one package for x86 PCs and tablets which allows for native licensed GAPPs and also is licensed by Google for OEM distribution. This might just cut it. If now your app doesn't run, its probably because it doesn't support the x86 platform. Then, I really have no idea how to go further.

This is a developer focused release and is as such not at all feature complete and buggy. Think of it as an "alpha" ROM. It might refuse to boot or have various other issues. It might make your test PC completely unusable. Do not blame me if this happens, and please heed this warning.

Check this out ("their" comparison to other Android-on-x86 projects): 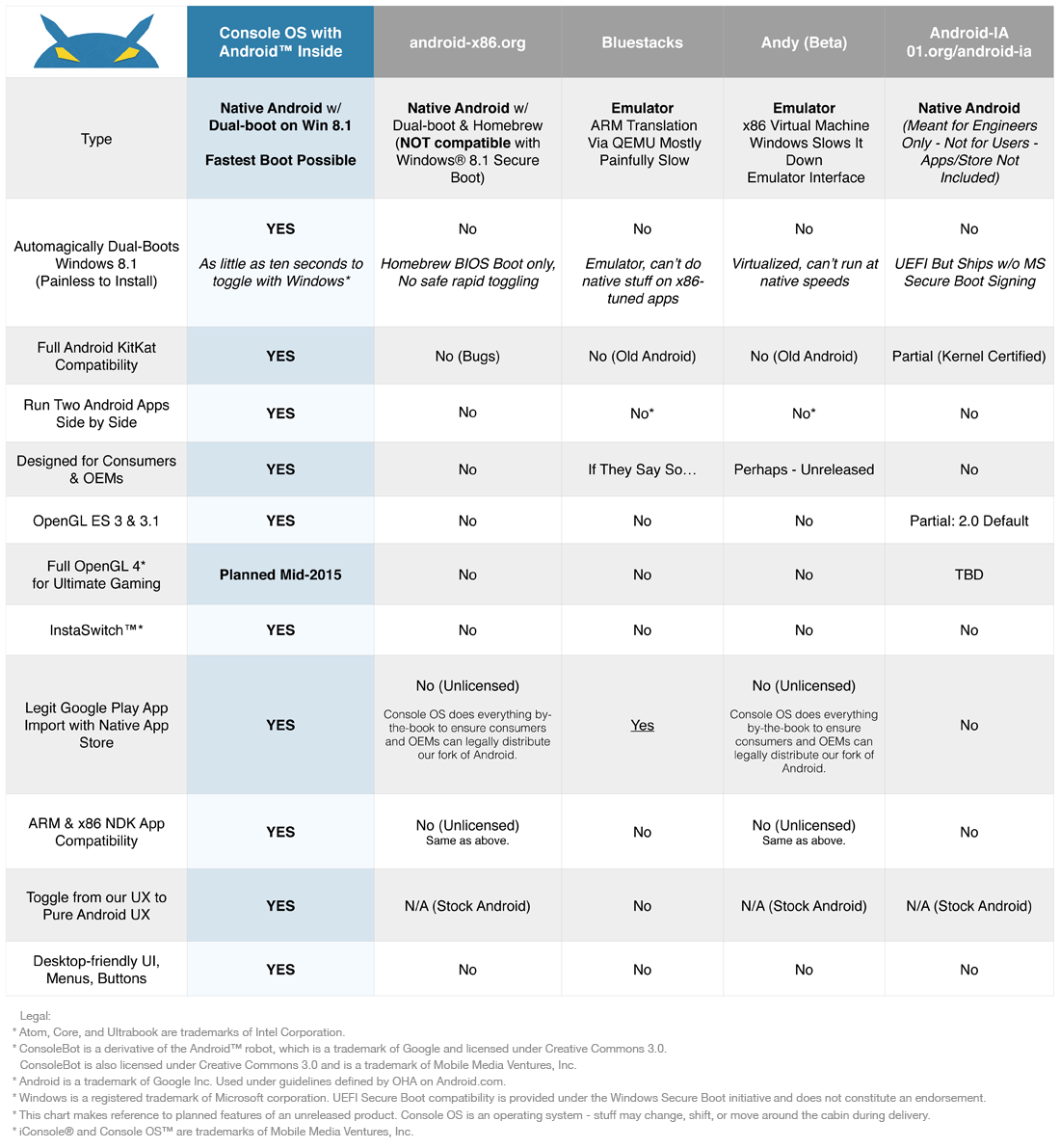 Google recently released an ARC Welder Chrome app, which allows you to run Android apps if you’re on Chrome OS, or using the Chrome web browser.

Look at this Getting Started guide.

I hope this works for you. Add a comment if you need more info.

Not the answer you're looking for? Browse other questions tagged applications android-emulator emulators or ask your own question.