How to not be asked every time whether to use TouchWiz Home or TouchWiz Easy Home?

On my Samsung Galaxy SIII Neo (Android KitKat 4.4.2), as soon as I reboot the phone and enter my password to unlock the screen I get the following dialog box, asking me which home screen app I want to use. I am then asked the same question on several other occasions (such as when I exit another application, perhaps one that fires up by default when the phone starts): 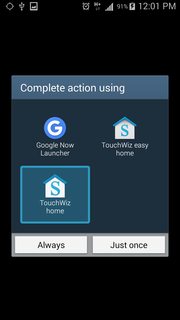 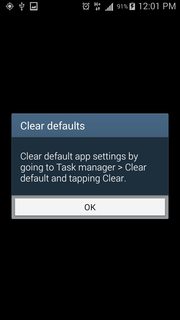 Click to enlarge
The problem is that every time I reboot my phone I get asked the same question. Is there a way to permanently store this setting (and perhaps change it at a later time via the phone's Settings app)?

This seems like a bug on my particular Samsung device (since I haven't had the same problem on other Samsung phones I have tried). I wonder whether there's a way to fix it.

You have said that if you select Google Now launcher the problem does not happen. It sounds like Google Now is forcing the choice. If you do not use the Google Now, I would suggest uninstalling it and this should fix the problem for you.