I have a Nexus 5 phone and ever since I allowed a system update, it won't let me post pictures to Instagram. It keeps talking about turning off a "screen overlay", but then when I try to follow the steps to get to that setting, it just sends me in a loop and doesn't actually let me change anything. 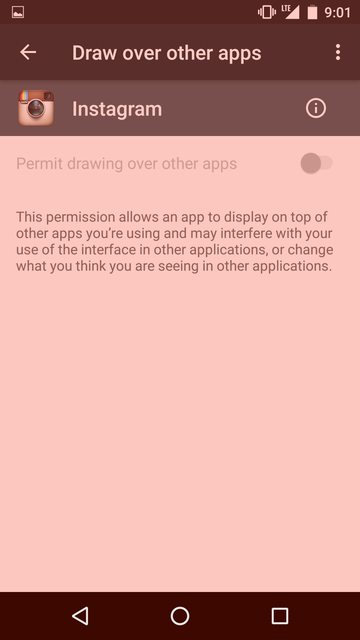 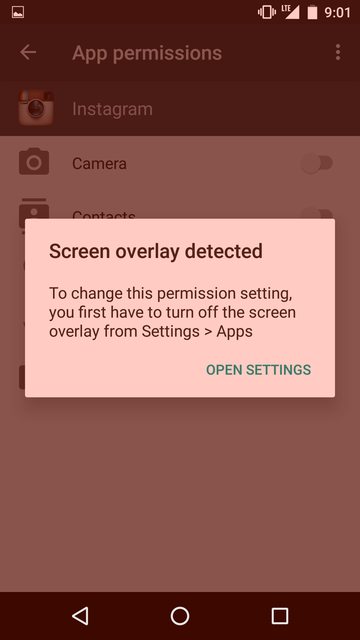 I had this same problem with my Nexus 5X, using Android M. I also went ahead & turned all the permissions off, except for Twilight, the suspected culprit. I still had the problem. So I went ahead and also turned over the overlay for Twilight, and I did not have the problem.

So, Twilight is the "problem", in my case and in the case shown above. (I put problem in quotes because it seems to me like Twilight should not be to blame in this case. Instead, multiple overlays should be possible.)

Where is This Setting??

For those who had this problem, or want to understand what we're talking about, here are the steps to get to this "hidden" setting, within Android M:

Last little tidbit: I am not 100% certain about this, but from what I know of Android, it seems things work as follows in Mashmallow:

There are three places to check. Not just one.

Same as above, but with Show System Apps turned on

Settings -> Acessibility -> Scroll to the bottom. It lists app names. Just turn them all off for now.

There are some apps that are handled as Accessibility Services, for instance, Assistive Touch.

You can find them under Settings -> Accessibility -> Services.

Not the answer you're looking for? Browse other questions tagged settings nexus-5 .

1
MOGA Pro Power gamepad not detected in Chrome
2
Missing "Download offline speech recognition" Setting Option on Nexus 9 Lolipop
1
Nexus 5 not detected by ADB
0
Space deleted but not reclaimed for re-use
1
My Nexus 5 won't update
6
Screen overlay detected, what is the problem?
4
“Screen overlay detected” dialog? Turned off everything, doesn't work
1
How to get the screen overlay to deactivate on an lgg stylo
0
Screen Overlay Detected, Permission problem