Pandigital is advertising on their site, that users of their devices can now "download & enjoy Android apps" after applying a firmware update. 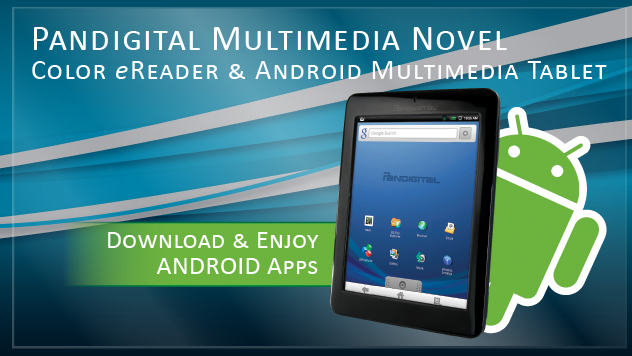 Is there a way to get Android Market on the Novel, without rooting it?

More details of the device in question:

From page 53 of the user guide, you need to install the Android SDK and use ADB to load applications. If you do this with the Market (3.3.12) I would expect you would be able to use it normally after that.

I also have the Pandigital Novel, did the update but it only gives you a 1.5 Android, which originally was promised to be a 1.6 Android.

Secondly, the SlideSAM 4.0 becomes SlideSAM 4.1 with the firmware update, but now crashes regularly when entering the Android Market online...

All in all, Pandigital left us hanging with no options... if you're lucky, you can hack your Pandigital and give it the Honeycomb 3.0 Android but if you're like me, (not a programmer), you wouldn't know a honeycomb if it hit you upside the head!

If you happen to find a way to install .apk files directly to your Novel, there are files to install the 3.0.26 Market, or if that one isn't compatible for some reason or doesn't work well (it's the newest one), heres a link to the 2.3.6 Market.

Not the answer you're looking for? Browse other questions tagged google-play-store pandigital-novel .

2
How can I run Flash on a Pandigital novel hacked to run Android 2.1 (Eclair)?
3
B&N Audiobooks on Novel
2
How can I root my Pandigital Novel 7" Tablet?
0
PanDigital Novel - how to replace/update certificate store?
45
How to keep two versions of an app installed?
41
How to get rid of update notifications for a given app in Google Play Store?