My Phone Installed a Duplicate System on Top of Existing One. Uninstall How?

My phone has been randomly restarting by itself and after its last restart, the screen showed the "New Phone" setup wizard like what you'd see when you get a new phone.

I went through the setup process since it wouldn't go away despite force restarting or removing the batteries. Now my media files from my then existing system are invisible when you check gallery, but the internal storage still says it's fully occupied.

It's a Note 4 T-Mobile Lollipop 5.0.1 N910T and it installed/duplicated that same OS version I currently had on top of my existing system (not Note 4's factory android version of KitKat). It installed a duplicate new clean slate of the phone with only the native apps it came with, while the memory still seemingly has my files but are hidden (or encrypted?) and not classified as anything else but just "Others" when you check it in the My Files app. It's no longer asking for my then screenlock password or fingerprints since it's booting the duplicate install.

How do I uninstall only this duplicate system and recover my files? I had some files not synced in the cloud when it happened so I didn't want to do a factory reset yet. I've tried Kies and SamsungSwitch to explore the phone and all the folders would just show up empty yet still say the internal memory is fully occupied (~23GB out of the 24 usable GB). The external microSD's files can be read just fine. Tried calling Samsung and they don't know how either. Screenshot below shows that the phone can see its memory is full but couldn't classify the files in it so it just says "Others" (gray bar; the "SD Card" in the graph stands for the External MicroSD)

When explored via PC (Win), folders are empty (pointing to that duplicate install, while the existing files seem to be hidden:

Screenshot of My Files app showing internal HD is full but could not distinguish what those invisible files are, Gallery is also empty. The "SD card" stands for the external MicroSD files which had no issues and I can access just fine: 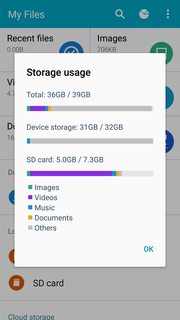 I'd try to do a full backup of your entire phone contents as is with Kies, save to your desktop computer, then factory reset and start over and use Kies to try and selectively restore the data you're trying to recover.

According to a thread on xda here when using Kies Restore it extracts all contents of the .sbu backup file to C:\Users\{LogonName}\Documents\samsung\Kies\sbu\temp\{NumberID}\{Files Extracted} which you could try to explore and see if you can access the data from there.

Not the answer you're looking for? Browse other questions tagged data-recovery encryption restore uninstallation or ask your own question.

5
Where are displayed shortcuts stored?
0
External SD card not being recognised; data intact on card
0
How can I get my data back to my pc?
0
how to uninstall apps installed on non existing sdcard
0
How to recover data from corrupt SD Card formatted as Internal?
4
Decrypting microSD card on another Android device or desktop computer
1
How to pull data from internal memory on an unrooted phone?