"Priority only" as default mode - Marshmallow

When I try to change the "Notifications mode" using the volume key, it always defaults to "Alarms only" mode, but I would like this to be set as "Priority only".

Alarm mode is activated when Vol is decreased progressively reaching silence first, next vibrate and on further decreasing the volume (watch closely and you would notice these steps). OP has clarified that this the behavior expected except that desired end mode should be Priority mode instead of Alarm mode

Since we are talking of changing the default behavior of OS, one way could be to root the device and tweak or use an app. automation may be preferred option, since it doesn't involve rooting & modding. Many apps are available. I prefer using MacroDroid , since it is free (upto 5 macros) and easy to learn. To understand how MacroDroid works and required settings (app guides you through the settings - make sure from the app settings you activate ignore battery optimisations, my answer here. The drawback of automation approach is that it won't perfectly replicate the expected behavior and has snags, which are mentioned at end

You would need two macros for this

In the next macro, we make sure that if the Volume is further decreased from silence or vibrate state, we set it to Priority Mode. To ensure that it happens only when this state is reached, we use the flag as constraint and re-initialize the variable to 0 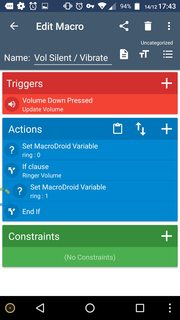 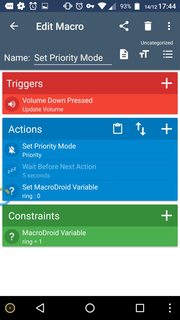 OK , I had mentioned that it isn't perfect, mainly because you are trying to override default OS behavior without rooting and modding. So, here are the glitches :

Not the answer you're looking for? Browse other questions tagged notifications 6.0-marshmallow .

4
How To Change Default "Do Not Disturb" To Priority Only
8
How to prevent brightness from going to full when the battery low popup appears?

2
How to end do not disturb mode?
0
How to Allow Caller Who Can Call You During "Alarms Only"?
6
Marshmallow, Priority only mode, Viber still rings with sound?
0
Enable Notification LED in Do Not Disturb mode in Android 6
0
Setting alarm ringtone on Google clock on Marshmallow
1
What does "messages" mean in the Priority Only settings in Do Not Disturb?
1
How to stop notifications from interrupting music in Android?