I am continually getting prompts for installing apps, such as Clean Master and or 9 apps on my Android phone. I turned off the option "Install apps from unknown sources" in security settings but then a message would popup saying "Install blocked" every time, as shown in the screenshot below.

So, how to stop these annoying prompts? 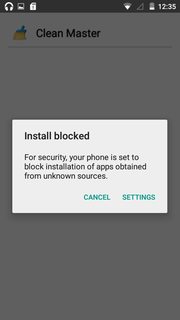 You're better off with Izzy's advise and find and weed out the app trying to install that Clean Master app. Anyhow, there you go with an another solution.

When you attempt to sideload an apk using UI or any app that attempts to install an apk and isn't granted the permission android.permission.INSTALL_PACKAGES, Package Installer app comes into action and its activity PackageInstallerActivity is launched. The setting for unknown sources (install_non_market_apps) under Settings Storage's database is checked and based on that, you're either shown that prompt (dialog) or the permissions and the install button.

Even if you manage to find a hack that disables that prompt from being shown, Package Installer would still be launched and the UI would look awkward since only app's label and white space would be visible to you, which would do naught but create confusion.

The solution I ended up with is to get rid of the activity PackageInstallerActivity. You can use Elixir 2 to disable that activity.

You can also use adb in this case

Now whenever you or an app attempt to sideload an apk which requires launching the Package Installer app, you may either get a toast like in the following image or an app registered to open/explore an apk would be launched or be suggested by system. 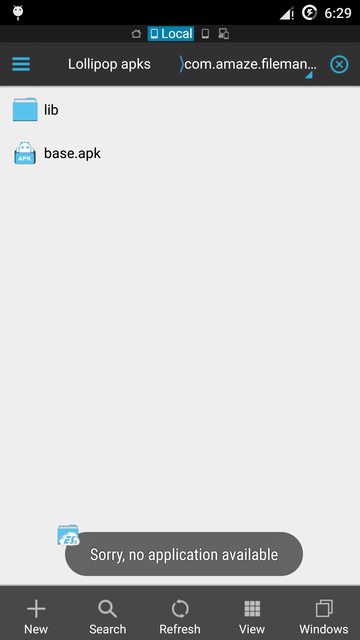 If the toast becomes noisy, hide it using EnhancedToast1 or UnToaster2. Since they are Xposed modules, you would need Xposed Framework appropriate3 for your Android version.

Note that disabling that activity wouldn't affect the ability of Play Store to install an app, neither would it affect adb install because the underlying package manager is intact.

You can use automation here too. Example, whenever your preferred file manager is active on screen, enable that activity so that you can continue to sideload an apk, should you decide to, and keep it disabled for any other on-screen active app.

You (KitKat or Lollipop users) can hide/block the whole Package Installer app. You definitely need adb for that.

Every time you intend to remove an app using Settings app or sideload an apk using UI, you must unhide/unblock Package Installer app.

Note that hiding/blocking that app wouldn't affect the ability of Play Store to install an app, neither would it affect adb install because the underlying package manager is intact.

I have a Chinese pad/phone that has built in system Trojans. The pad/phone was unusable with constant pop ups. I rooted it and it's was a bit better. Malwarebytes was the only scanner that found 3 trojans. All 3 were system trojans. I tried lots of ways to fix the problem nothing worked. The main culprit was system the pad/phone has two system icons. One is the normal Cog. The other is a green droid. By disabling the green droid system almost every problem gone. Thanks to this post i installed Elixir 2. I disabled every thing in system that i don't use and it's now 99% better.

Share
Improve this answer
answered Mar 8 '17 at 23:41
user212599user212599
Add a comment  |
Highly active question. Earn 10 reputation (not counting the association bonus) in order to answer this question. The reputation requirement helps protect this question from spam and non-answer activity.

Not the answer you're looking for? Browse other questions tagged settings side-loading or ask your own question.

6
Apps trying to install in background
7
How can I stop an application from updating itself?
2
How to block all android application installation?

23
Can I install apps on phone without using the Android Market?
3
Possible to install APK from personal website?
2
How do I safely install an app not from the Play store?
1
Install adb enabled setting from zip
141
Why can't I press the Install button when installing applications from unknown sources?
2
How to install apk in 2nd user of android 5.0 without playstore
0
Install arbitrary apk from filesystem on Android 10?