I had granted the MacroDroid superuser access when I was using it so it may have made the app that I found today a system app.

I tried to launch it but it doesn't have an interface.

While checking its permission I came to know that it has the connectivity permission, hence, I have to find out what data it is sending to internet. How can I monitor its activities? 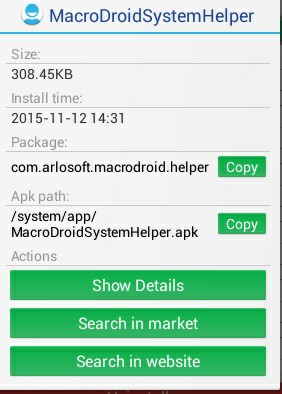 It appears that MacroDroid now (I've v3.10.1) doesn't go with the approach of installing helper file inside /system as default option. Instead, it now uses it as a backup approach and only when you're having an issue with GPS/NFC. If you've that file inside /system then either it was installed when you were using a version older than v3.10.1 or you deliberately chose to fall back to older technique via its settings.

The latest version of that helper file is 1.2 and following are the permissions mentioned in its manifest:

In order to connect to network, it must ask the permission android.permission.INTERNET - not present in the manifest. So you can be rest assured that the app, on its own, won't be able to send any data.

That said, given the nature of the title, you don't need to monitor activities of an app (no benefits) if your goal is to find out what data it is accessing or is sending. You can use XPrivacy in this case. It requires Xposed Framework. XPrivacy can notify you when the app tries to access a privacy sensitive permission. That would give a rough estimation of the extent of data app may be accessing. You can use a firewall to restrict app's access to internet and get notified whenever the app tries to access network.

Still, in order to see the data the app is sending, you would have to capture it or sniff it at least. Answers for Capturing mobile phone traffic on wireshark and Monitor network activity in Android Phones may prove to be helpful. (I've not tried any of the solutions there.)

Not the answer you're looking for? Browse other questions tagged applications privacy data-monitoring macrodroid or ask your own question.

59
Block apps from accessing the Internet on Android device

2
Video stream from Android phone to laptop over the internet
3
Can I use Adblock Plus for Android and still see per-app data use?
2
Can Google+ Friends See Your App Downloads on Play Store, or Just the Ones You Rated?
0
Malicious Android Apps installed remotely on my device
3
Huge Data Usage started last month - 4GB over mothly average
0
Some icons missing all-together
0
Does “Draw over other apps” permission allow the app the see the content of the background app?
2
What are all these Google internet hosts (domains) and why is stripped-down Android connecting to all of them?