I have a LG Nexus 5 D820 model purchased in USA. Now I am in Chennai, India on Airtel network. As I understand Indian LTE/4G bands are 3 and 40 and unlucky me my service provider Airtel seems to be in band 40. D820 does not support both band 3 and 40.

I have seen few XDA posts that explain how to enable band 3 in D820. I could not see any posts for the same for band 40 and few comments then and there say it is not possible.

Has any one tried enabling band 40 on their D820? Even more better has anyone tried using their Nexus 5 D820 in India on LTE/4G with Airtel?

I followed the procedure said in a XDA forum (the very first post) and I got the LTE working in my phone.

I confirmed the same and added a confirmation to that thread as:

I am using Nexus 5 (D820) purchased in USA and being used in Chennai on Airtel network. I read through many resources about the LTE bands that the phones (D820 and D821) support, about the bands that different service providers support. After reading through the posts in this thread I was aware band 3 can be enabled on D820. Even at this moment of writing (after enabling the band 3 on D820) I believe from various links Airtel uses band 40 in Chennai.

To my surprise when I enabled band 3 (after few tensed moments) I saw LTE indicator in my mobile. The screen shot is as below: 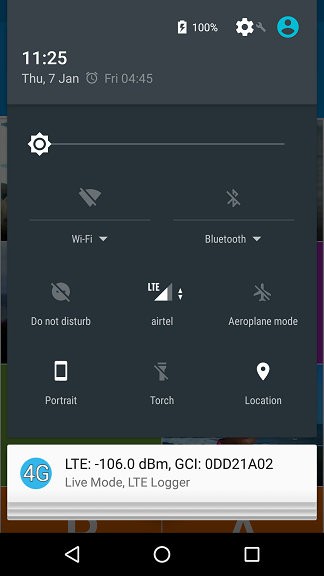 The app LTE Discovery did report that my mobile is in LTE when I made it to work in "LTE mode only". However it does not report the band that is being used.

I tried Speed test, but it showed a disappointing speed as good as 2G (1.5mbps download). I need to try this at other places and see whether really 4G is enabled in my phone or not.

In the following image, the middle entry is 2G and rest are 4G.

Also I used Nexus 5 Field Test Mode app and it says I am using band 3 - surprise. 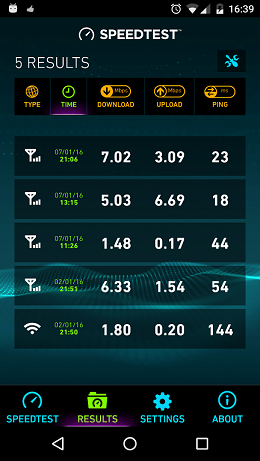 Edit: This was performed in my Nexus 5 D820 running stock Android 6.0.1, stock kernel, rooted and with custom recovery TWRP.

**Edit2:**This change seems to be permanent. I had OTA updates installed and after a point of time reinstalled latest ROM and even tried locking boot loader. In spite of all these changes still LTE is working in my phone.

Not the answer you're looking for? Browse other questions tagged nexus-5 4g or ask your own question.