How to use speech-to-text offline?

When I am connected to Wi-Fi, I am able to say "Okay Google" from any screen and it will automatically start a voice search for me and look up whatever I say. I am also able to manually start a voice search by tapping the microphone button at the top of my homescreen on the right side of the Google search bar, and my phone will search for anything I say. Lastly, when I am using the on-screen keyboard to type I can hit the small microphone button in the corner and speak whatever I want to type (which it will instantly change to text, but I have to hit the "x" with my finger to make it stop).

When I go offline (not connected to Wi-Fi or data), however, things start getting weird. I can bring down the white pull-down menu for voice search by saying "Okay Google," but after I am finished talking it will stay stuck loading on "Recognizing" for a while, until finally it will say "Can't Reach Google at the moment" (see image 2).

After messing around with things for a while, I finally got it so that when I am offline and hit the microphone button on the keyboard, I can speak my sentence and then after an absurdly long wait it will translate it into text (I don't know if this is normal or just my phone).

What I've tried/what my specs are

In my Settings>Language & input>Google Keyboard, it is set to "English (US)."

Settings>Language & input>Google voice typing, it is set to "Automatic" and inside that the "Languages" is set to "Default language: English (US)."

Why do the Google offline voice commands not work when I am offline and how do I make it work?

*Answers as to why the keyboard text-to-type takes forever when offline are appreciated to but they're not my main concern for this question. Thanks! :) 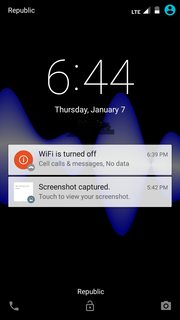 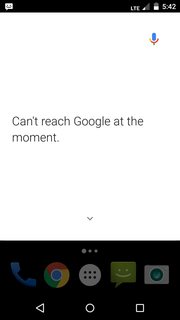 EDIT: As of October 2016, I got a new phone (the Moto G4 Plus) and it has the exact same problem. All the symptoms are identical and I cannot use the voice commands unless I have Internet connection, and the offline voice-to-text is really slow (still not my main concern). It has the most recent version of Marshmallow (Android 6) installed.

EDIT 2: Occurs on Android 7 now as well. But I found out it was the Google App, not the phone or OS specifically. (see answer below)

There are two apps involved in this case. First one is Voice-To-Text engine app. Other one is Google app.

The app you start by hitting the mic on keyboard is the former one. It normally relies on Internet to work, however, can be made to work offline too. I can't explain the reason of the long wait though. Maybe it tries to connect to internet first and then, when it fails, it switches back to working offline method.

The app that you start by saying Ok Google is the latter one in this case. It also uses Voice-To-Text engine in the background, however, it uses the input it receives from your microphone, directly to start a Google search. Which is impossible to perform when offline, and therefore, it fails.

Okay, over a year later I have finally figured out what is going on. My carrier apparently uses "MQTT protocol," which means they need the Cellular Data option on to send texts (however, they have their own app set up to make sure that sending texts doesn't count toward your monthly data allotment).

The problem is that when the Cellular Data option is turned on, the Google app thinks that it should have Internet connection even when it doesn't. In my case, I don't pay for any data but I have to keep the "Cellular Data" option always on, as previously mentioned. But this makes the Google app not recognize that the phone is offline, and so internally it doesn't switch over to its "offline mode" and that's why the Offline Commands don't work and it doesn't recognize speech. I tried turning off my Cellular Data (while not connected to wifi) and the offline features worked as expected.

This means that I am not able to use Google's offline features, though, unless I turn off Cellular Data. And when I turn that off I won't be able to receive texts. So I can't have both :(

Not the answer you're looking for? Browse other questions tagged voice-command moto-x google-voice-actions .

1
How do I use voice input in Google Maps on a HTC Desire?
5
Reducing the list of language options
4
How do I turn off speech search in Jelly Bean?
1
Nexus 5 "Ok Google" voice output in a non-English US language
4
Offline voice recognition Kitkat
3
Perfect voice recognition, but Voice Commands don't work
9
How to activate Google now voice commands from the lock screen like siri?
14
Using Google Voice Recognition offline