Droid Explorer - Input string was not in a correct format

When opening Droid Explorer, it gives an error message "Input string was not in a correct format." 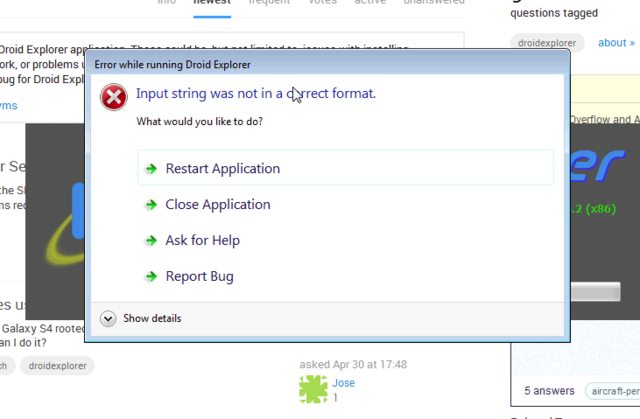 How to fix it?

As the developer of Droid Explorer, I would suggest that this is more suitable as a bug report, which actually already exists.

Although, there is probably a workaround that you could do.

Check the android-sdk/build-tools directory and see if there are any folders that have A-Z in them. If one does, that is the problem. For example, I have seen situations where there will be a folder called android-4.4W. I would suggest deleting that folder, open the SDK Update Tool and download the versions of the build tools that you want/need.

Not the answer you're looking for? Browse other questions tagged droid-explorer .

1
Nothing happens when attempting any function of Droid Explorer, getting "Input string was not in a correct format" error instead