Is there any way to set a different volume for every alarm? Samsung has had such a feature for ages, but is it possible to do something similar on a stock rom? 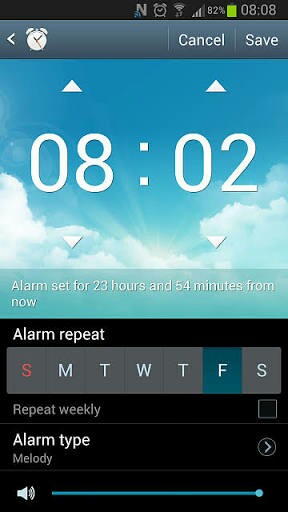 Third party apps don't seem to be able to do it.

b) Increasing/decreasing the volume of each and every alarm tone to something "louder" and something "softer", then copying these new alarm sounds to sd card/alarms

Both are significantly tedious as compared to Samsung's method.

I would recommend editing the ringtone files, because you don't even need to leave your Android in order to do it.

Searching the Play Store, I've found 2 apps in question that claim to adjust volume on .ogg and mp3 files:

Hope one of these do the trick for ya. I love the Tasker idea (I use Tasker in many hackish ways that would be considered unorthodox haha)

You can customize seperate volume, ringtone, volume fade-in(volume build up time) for each alarm.

Not the answer you're looking for? Browse other questions tagged root-access alarm or ask your own question.

3
How do I get to Alarms?
6
Set an alarm for tomorrow
0
Different sounds for different alarms
4
How to have the alarm audible when on vibrate or silent?
4
Alarm silent, even when not in silent mode
1
Alarms Sounds/Songs
1
Alarms are not working
3
How to set default alarm ringtone in Android 6.0?