Why is there no direct message widget on my Galaxy S6 stock?

On a brand new Samsung Galaxy S6 in Europe with Android 5.1.1 and Nova Launcher there are widgets for adding a shortcut into a contact and to call a contact's phone number, but the one for text messages/SMS that I know from older versions. On my S5 with 5.0 I have this widget. I have not installed an additional messaging app that replaces the stock SMS application.

How do I get a shortcut for sending SMS to a contact? 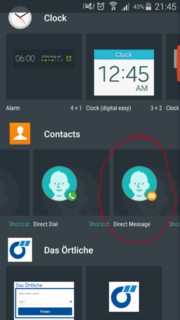 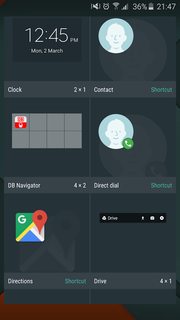 It seems this is an issue specific to some Samsung Galaxy S-series devices running Android 5.1.1 Lollipop. There's nothing we can't do other than waiting for update from Samsung (if it's really a bug).

I believe it's either a bug, or Samsung's decision to remove "Direct Message" widget (for unknown reason) from their Contacts app. There were some reports about this issue.

I've been trading support emails with the Nova folks. According to them, "Samsung removed the direct dial shortcut for no apparent reason in their Lollipop update. It is also missing from the TouchWiz launcher."

And lastly, on T-Mobile forum which gives hint on not carrier-specific,

My wife and I both have the S5 on 5.1.1 (F0G6) and both have this problem since the update. It happens for Direct Message shortcuts/widgets too. It appears to be a TouchWiz bug (guessing) since changing Launchers to something like Nova keeps the shortcut ... It is a small thing but a big problem for me - help!

My best friend has Verizon, and hers are disappearing as well, so I don't think it's a T-Mobile issue, I think it's an OS issue.

Which was replied with,

This is a known issues. Both T-Mobile and Samsung are trying to find out what is causing it and fix

Not the answer you're looking for? Browse other questions tagged sms 5.1-lollipop widgets samsung-galaxy-s-6 or ask your own question.

1
Is there a widget available that duplicates the Launcher Pro Calendar Agenda widget?
3
How to get Power Control Widget (Status bar widget) on stock rom
6
Samsung Galaxy S2 Wifi Hotspot Toggle Widget
2
Stock widget in Apex Launcher
3
Is there a widget for Twitter search?
1
Galaxy S6 settings widget
0
Why don't I see Twitter's homescreen widget on my Android?