How does the "Format as internal storage" feature work in Android 6.0+?

How does the "Format as internal storage" feature work in Android 6.0+? See screenshot below: 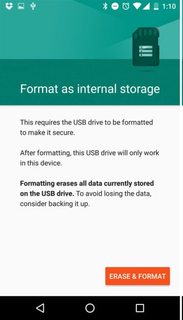 Why is it the case that "this USB drive will only work in this device"? Is it due to a partition format? I have tried to read it in Windows but the file format is RAW; is it in EXT4 format so Windows can't read it? What will happen if I insert this card to another Android 6.0 device? Will the other device able to read it?

If you use this feature, your external SD card is replacing your internal storage. In the process, it will be encrypted. You no longer can "simply unmount" the card to read it in any other device (including a card reader attached to your PC), as in that case the file system would be unreadable in the latter (due to encryption – which is done "for security", so a thief cannot simply remove the card to circumvent your device's lock screen and get straight to your data).

Reference: Android 6.0 can treat SD cards as internal storage… at a cost

Choose internal storage and the microSD card will be reformatted and encrypted. Once this is done, the card can only be used as internal storage. If you try to eject the card and read it on a computer, it won’t work. All data on the card will also be erased, so you may want to back up anything important first. Android does provide an option to migrate it, but early reports suggest it’s unreliable.

You can still choose to have apps installed to either the true internal storage or your microSD card that’s been formatted to behave like internal storage. But if you had a phone with 8GB of storage and a 32GB microSD card, you’ll only have 32GB of space for music, movies, games, or other files, not 40GB.

Notice that the space is not increased by the size of the sdcard, but to the size of the sdcard. You’re basically swapping out your internal storage (which is typically eMMC, which is fairly quick), with your sdcard (which is typically slower than the built-in storage chip). You’ll be trading speed for capacity. In some cases this is a fair trade.

There is one more interesting tidbit: with a little bit of work, adoptable storage extends beyond just microsd cards. You can technically mount any USB OTG device as adoptable storage. In theory, this would let you have a 1TB hard drive attached via USB OTG. Of course you’d never be able to remove that hard drive, so the uses are very limited – but very interesting.

If you’re interested in forcing “any” storage device connected via USB OTG to become adoptable storage, here’s the command you’ll need to know. We haven’t tried this, so proceed at your own risk.

Where AndroidCentral in Inside Marshmallow: Adoptable storage continues:

But you probably shouldn't.

Once a storage device is adopted, it becomes part of the system and is no longer removable. Sure you can physically remove it, but you'll be prompted to put it back while apps and services crash on your phone or tablet. It's adopted — taken in and loved by the system, and made part of the whole.

Glad I read this, I was thinking adoptable storage was a great idea and I could buy a 16GB phone and simply throw in a big microSD card and beat the system. But, probably not a good idea now that I understand more of how it works.

Plus, to underline what I wrote about factory-reset:

You can remove and reformat the card whenever you like, but doing so will force you to factory reset your phone.

I opted to keep it as normal external storage. At least that way if the phone has a failure i still have access to my SD card files. The other way keeps it encrypted and if the phone were to experience phone ending glitch the card would be useless as its encrypted and the only device to see it is dead. No taking it out and inserting into a computer to recover my pics or vids or music.

According to Android 6.0 Marshmallow tip: ‘Adopt’ your MicroSD card as internal storage [Video], there is a "way back":

Thankfully, it’s not completely permanent. If you decide you’d like to use it just to store media, you can change it back by heading to Settings>Storage & USB, then selecting the card, hitting the top right menu and then select ‘Format as portable’.

But read between the lines: Format means all data on it will be erased. So if you want to do that, you'll need to make sure having secured your data beforehand. No easy "USB card reader" way here, you'll have to copy everything via USB or network.1 And if the card breaks, no way to use the card reader and some recovery soft to rescue at least parts of it; encryption makes that impossible. If it's broken it most likely won't even mount on the device anymore – so everything you haven't backed up elsewhere will be "gone for good".

As long as the card is "good", there's some interesting pointer found in Decrypting Android M adopted storage (emphasis mine):

Android M allows for adoptable storage, which is implemented similarly to internal storage FDE -- using dm-crypt with a per-volume, static 128-bit AES key, stored in /data/misc/vold/. Once the key is extracted from the device, adopted storage can be mounted and read/written on any Linux machine. Adoptable storage encryption is done purely in software (at least in the current preview build), so its performance is likely comparable to encrypted internal storage on devices that don't support hardware-accelerated FDE.

1In Storage › Internal Storage you should find "migrate data" which will move your stuff back to internal – if you got enough space left there. (thanks to Barleyman for pointing this out)

A second answer to have some points more easily accessible.

Titanium backup does restore everything to internal storage. Since in Galaxy S5 at least the reported available storage is wrong, it'll fill it right up. At that point you start getting constant popups from crashing apps and you have to work your way to appinfo for some large app and either uninstall it or move it to external to regain control.

There is a way of batch moving apps between internal and external, apps2sd all in one. It's a bit slow to process the files but it's a hands off process.

There is an excellent post on reddit Let's clear up the confusion regarding storage in Android once and for all, including adoptable storage in Marshmallow.

But as far as I understand the sticking point is still that developers still control whether their app is movable to SD, in this case the extended internal storage. So you can still run into the limitation of the phones build in storage. At at least I can allocate all free space to the /data partition by repartition it (there are more handy .pit files for Samsung device), since I won't need any /media partition since as far as I understand, Android will move all user data, pictures, offline files of streaming services etc to the integrated SD card; please confirm or correct.

Not the answer you're looking for? Browse other questions tagged external-sd 6.0-marshmallow adoptable-storage .