I'm reading 'embedded linux' and in chp.6 "filesystems" there is a figure that I do not understand. 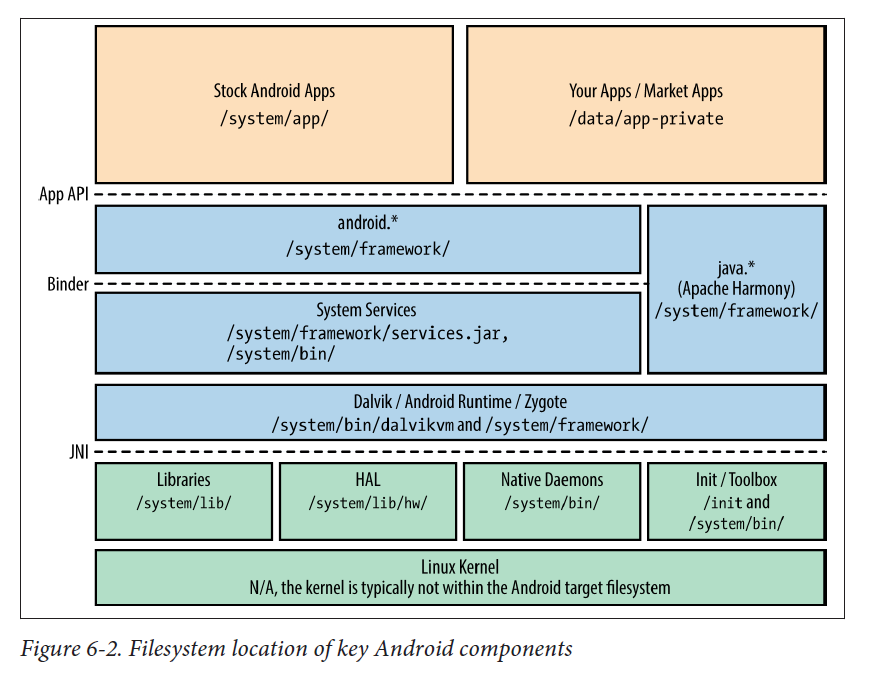 here it says that the 'linux kernel' is not seen from android filesystem. This give me some confusion:

-> The linux kernel image is definitely stored in a storage attached to the device. So when this figure says 'not seen from the android target filesystem', does this imply that the filesystem seen from the 'linux kernel' and 'android framework' is different?

In other words, if the kernel is to do its job, it needs to be able to see and access all the files available to the system. On the other hand, since android is practically a 'user' from kernel view, its scope is limited? And it does not have access to the actual linux kernel image due to this reason?

The linux kernel for an android device will be built separately from the vanilla AOSP. Of course, one can configure to include the build of linux kernel inside the Android build process.

The kernel will be compiled and compressed into an image along with the ramdisk image. This is essentially what constitutes the boot.img which will be placed in the boot partition.

BTW there are several partitions divided inside whatever storage is used for the target android device.

While the linux kernel resides in the boot partition inside the boot.img, the android system will be stored in system.img which will be located in the system partition.

24
What is the boot process of an Android device?

2
Why does android init not die?
0
Can one determine the kernel version of a Samsung device from the Android version?
1
Periodic filesystem consistency checks are probably a good idea. Do current Android devices ever do them?
2
How to upgrade Android kernel version
1
"Could not do normal boot invalid kernel length"
0
How can I disable the GPS functionality from my android phone at the kernel level?
2
Possible to patch the Android kernel with root?