I am following these instructions to root my Galaxy Light - http://rootmygalaxy.net/root-galaxy-light-sgh-t399-install-twrp-recovery/. Part 1 seemed to work fine, but I am not able to boot into TWRP recovery with Vol Up + Power + Home, it's still the regular recovery mode with the volume up and down buttons to select options. How can I get to the TWRP recovery mode? I have a locked bootloader.

I noted from the provided link that your device is a Samsung Light SGH-T399, running Android Jellybean 4.2.2.

With that considered, you can try the Framaroot app to root your device. Follow the steps below (guide in the link) to root the device. After rooting the device, copy the TWRP image to your internal SD card from your computer, and use the Flashify app (get it here or here) to flash it to your recovery partition. Again, the app itself will be pretty clear as to what you need to do, or follow the steps below.

Framaroot usage (from the XDA link (with corrections and emphasis)):

Open Framaroot and select one of the following actions:

Possible cases once application has been launched:

A popup saying "Your device seems not vulnerable to exploit included in Framaroot", in this case you can uninstall app You seeing one or more exploit name, also click on one after you have selected an action and you will see one of the above messages

Possible cases once exploit had been selected: 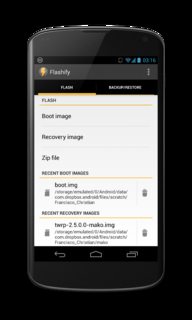 Reboot to recovery using adb reboot recovery, the Flashify app or the key combination, configure TWRP time zone and other stuff, take a NANDroid backup and then go do whatever you want with the device, flash ROMs and whatnot.

If you are worried that the custom recovery may get reset after a reboot, you need not. That particular issue is only applicable to flashes via ODIN on certain select enterprise-class devices (and most probably yours isn't one of them), and has nothing to do with the suggested method.

Thanks for the help, everybody. This morning, I downloaded Odin from a different place, tried to do the same thing, and booted into TWRP Recovery fine. I don't know what I did differently, but my phone is rooted now.

Not the answer you're looking for? Browse other questions tagged rom-flashing twrp or ask your own question.