Motorola Moto E LTE XT1528 (Verizon) running Android 5.1 I bought this phone in Aug, 2015. I have the box, the receipts and a copy of the transaction from Best Buy via ebay. (EDIT: the boatloader for this model can't be unlocked)

I pulled my phone out of my pocket this morning and was greeted with a "Select Language" screen. Somehow it had preformed a factory reset.

To my chagrin, it required my google account to use the phone. I set this up long ago and I never use the google account. I couldn't remember anything but a few letters of the account.

I tried all the recovery options on https://www.google.com/accounts/recovery/ but nothing worked.

It seems that now my only choice is to buy a new phone. Does anyone know if anything can be done?

Edit: In regards to the moderators suggested solution: With 5.1 you can no longer wipe the data and return to factory settings with the bootloader.

Edit 2: Verizon, Best Buy, Google were unable to assist. Motorola at first told me the "phone is now bricked" (their words). After talking with Google again they conferenced in Motorola who agreed since it was still under warranty they would service it. So I am sending it back to them.

As a curiosity I tried all of the suggested solutions in the answers that were suggested in the duplicate question. Specifically for the XT1528 there is no menu options in the pull down that allows you to try to bypass the boot loader block. In other words at 0:41 in this video https://www.youtube.com/watch?v=cLZOI-9tYg4 that button does not exist in the upper right. I added a screen shot showing the option that is not available so you don't have to watch a video: 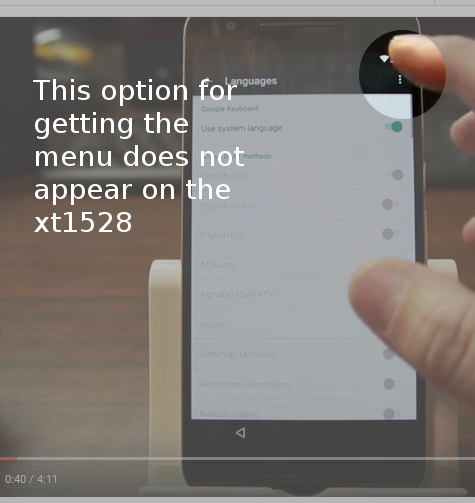 This is unfortunate because when I bought this product I had no idea how significant that spontaneously made up google account would become over time. The phone just said to create one, there was never any implication to how important it would be because there was no "Kill Switch" feature at the time that depended on it.

I'm well versed in the android tools, so if someone has an idea, I would be willing to see if it works before I send it back. So far nothing has.

Browse other questions tagged factory-reset google or ask your own question.

38
How to bypass “Verify your account” (Factory Reset Protection)

0
My phone got factory reset and all data wiped, can I find out how?
0
I am not able to open Google Account on New Galaxy Ace 3 Phone
2
How to sync personal dictionary between devices (Google Keyboard)?
17
Phone stuck on “Sign in with a google account that was previously synced on this device”
0
Forgot google account?
0
How to delete Google account from a factory-resetted phone?
1
Google account was hacked: how do I get my phone working with my new account?
0
My Google account was deleted, how do I sign into phone with that account