How to block ads in Android applications?

Are there ways that attempt to block ads in applications? It seems that it should be theoretically possible, by blocking web requests to certain sites, for example.

The most popular method is replacing the built-in hosts files with one that forces DNS queries to well-known ad servers to result in 127.0.0.1 (localhost). This effectively blocks most common ads, and most of the Google Ads in applications.

The downside is that applications can tell that ads are being blocked, and can either refuse to run or otherwise degrade their usefulness while the ad blocking is in effect.

Also, root access is required to replace the hosts file.

Beyond that, I haven't seen anything that can selectively block web requests for arbitrary apps. For some programs that only use internet access for ads, you could use a firewall app to prevent them from accessing the internet or -- if your ROM supports it (like the latest CyanogenMod) -- revoke the internet access permission from the app.

Again, root access is generally required to set up a system-wide app-level firewall or replace your ROM.

There are two different apps, AdFree Android and AdAway that block ads, theoretically in all applications. You must have a rooted phone in order to use these.

which is essentially an automated solution of modifying the hosts file, brought up by another user here. It appears that Adaway does the same thing.

If you do not have a rooted phone, you can, at the very least, use the Firefox Browser with the Adblock Plus AddOn (installed via Firefox).

You can also use a firewall or permissions-limiting application (DroidWall or LBE Privacy Guard, for example) to limit internet access for particular applications. These also require root.

To disable ads, you have to understand where the ads actually come from. There are easy-to-identify ad servers, and those can be easily avoided by editing your hosts file (you can edit hosts file on a rooted phone through ES file manager, or from a terminal session be it local or from your laptop/desktop).

But when the ad servers keep having random subdomains, that can be a real chore to keep chasing those updated servers. There are applications (previously mentioned) that help to ease that task--but it still is the same solution of getting hit with ads--and then blocking the new servers. None of those methods work if the ip address gets hardcoded in. That is the trump card.

Another option is to enable a firewall that denies ANY traffic for a specific application. That means: updates, ads, pushing your stats, etc...don't use your data plan and don't tie up your phone. Avast! Mobile security (free on marketplace or Play) gives you granular control when you want it. I have used Avast on desktops and servers, and run it on rooted Gingerbread and CyanogenMod9 (ICS). Very good appl.

You can use an ad-blocking DNS server such as AdGuard DNS. Unlike the HOSTS file method, you won't need to use an app, nor root your phone.

On ​​Android 9 Pie and later, you can use ad-blocking DNS servers by configuring the Private DNS setting:

For versions prior to Android 9 Pie:

Aside from the DNS / IP address-based ad blockers, I'd also recommend MinMinGuard (requires a rooted phone and the Xposed Framework). It features API-based blocking, where function calls provided by the advertisement network SDK are blocked.

MinMinGuard is an Ad-remover made with Xposed Framework for Android. MinMinGuard can completely remove both the ads inside apps and the empty space caused by those ads. Conventional ads removing apps are only able to block the ad content, but the space taken by the ad will still remain unused (black). MinMinGuard successfully removes that black space, which extends the app window and makes your user-experience better! 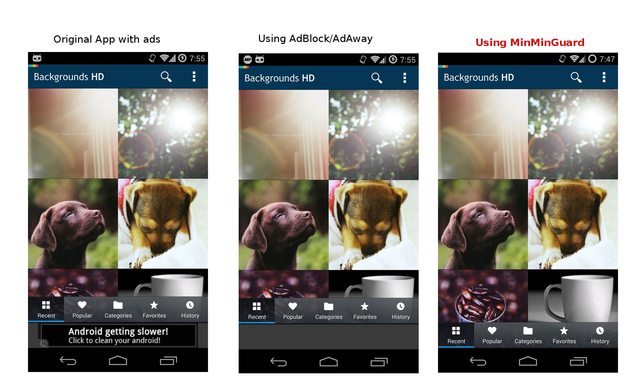 Adblock Plus is now available for Android.

Here's a snippet from Lifehacker's review:

If you love Adblock Plus on the desktop, now you can take it with you on your Android phone. Adblock Plus for Android blocks ads on sites while you browse and even suppresses ads inside of ad-supported applications. Best of all, it's completely free.

Adblock Plus for Android doesn't require root access to your phone to suppress ads, but works best if your device is rooted. If you're rooted, it'll suppress ads over 3G/4G and Wi-Fi with no additional configuration required. If you're not rooted and you're running Ice Cream Sandwich, it'll block ads over Wi-Fi but not 3G/4G. If your device is running Gingerbread or earlier, you'll have to set up Adblock's proxy manually to get it to work. Speaking of proxies, that's how Adblock Plus for Android manages to strip out all of those ads: it routes all of your traffic through their servers, and removes the ads before it gets to your phone.

Although incomplete I have a solution in place that is sufficient for me. I have configured the dnsmasq dns server in my lan to serve 0.0.0.0 as the response to a specified set of advertising hostnames.

The pro is that I have one solution that fixes this for both my tablet and my phone without the need to root either of them. The con is that it only works at home on my wifi.

I like the firewall approach. Recently installed the NoRoot Firewall and by trial and error found that if I block access to l[ab]-in-f[0-9]{3}\.1e100\.net (actually, the app doesn't support regex in addresses), ads don't get through.

I had similar problem before and non of the existing apps could solve my problems, furthermore I cannot root my company phone due policy. Then I realized that you can configure proxy for each and every connection (wifi and 4g) separately. So I installed a squid, configured to block most of the annoying ad sites and deployed in docker. Long story short:

Then configure the proxy on your phone to use the hosting machines IP address and 3128 as port.

If you would like to check details or simply compile your own image, the source code is available on GitHub: source and DockerHub: images

The latest Android Market app (I have 3.15 which is the first time I've noticed the option) has an option to allow you to prevent Google or AdMob ads from tracking you and personalizing the ads to your interests. If that's all you want to stop, then it's just a tickbox away.

Open the Market app, pressMenu scroll down to the Other Settings heading where you should see:

Google AdMob Ads: personalize ads based on my interests

Choose whether to personalize ads from Google and AdMob in mobile apps on this device. Learn more

Just remove the tick from that tickbox to:

If you opt-out, your device identifier information will not be used by Google for advertising going forward and you will not receive ads based on your interests or inferred demographics.

The answer is: theoretically yes, practically no. Several years passed since the question, but adware got even worse.

Best way to "block ads" is to "get rid of code that produces it". This is very hard to achieve, because this would require to get rid of adware roots, which are related to current world's economical model and entrepreneurship. It's like to rehabitate all people around the world, to react ads very drastically and ultimative: "either no ad, either no use of android os/devices". This could happen through children education, via seeding strong idea, like "ads is something criminal like porn/theft/deception and speculation/terrorism/narcotics"... In such way, after several human generations adware would eventually starve, because any "ad-related activity" would refer to organisation which will be considered "codnucting illegal activity" and enormous penalty tax should be applied, and person who publish ad jailed.

There exists other, faster way: It is to create a group, who would develop android alternative firmware, essentially same as android, but with licensing terms explicitly disallowing using of ads, and maybe even some banning/firewall engine, embedded into system and easily tunable by users. Good implementation would be very costly, and it would take time to put it on a very single phone. But that would definetely force android community to react.

That is some effective approaches, but any real action should involve Google, which should "change its mind and become white and fluffy" in order to really get rid of adware in android. This is very unlikely to achieve, with current world's economical model.

Not the answer you're looking for? Browse other questions tagged ads .

2
Disable ads in applications?
-1
What is the most effective way to disable ads in an Android app?
0
How to get rid of ads?
-1
How to block Apps Advertisements?

4
Which system process do I block from the internet to prevent ads from showing up?
1
How to block those annoying "Your device is infected" ads in Chrome without root
0
How do I block ads on YouTube in all WebKit based browsers?
6
Stop video ads in apps?
1
How to automatically remove placeholders for ads when blocking them in Chrome?
1
Stop 'in app' ads from loading?