Apps trying to install in background

I recently wanted to install a metronome app, so I downloaded one from the Play Store, but in the "install" step nothing happened. The app just wasn't there. I installed another one and forgot about that strange issue.

Yesterday though, something started to happen. Every now and then (and it's getting more and more frequently), I get a notification that some app tried to install itself (!) but was blocked because it's from "unknown sources", and it's prompting me to disable the "block install from unknown sources" check from Settings.

It looks like there are more than one apps trying to install themselves: "Superb Cleaner". "com.android.helper.patch[...]" and some more.

At first I though these might be system updates and was tempted to disable the "unknown source" block, but now I am worried I might have some malware on my phone.

I do have some sensitive information (browser logins, credit card data), and I also don't want to factory reset my phone.

Where should I search for the APK that is trying to install itself (or the APKs)?

EDIT: It's this application: https://play.google.com/store/apps/details?id=com.andymstone.metronome. I'm not entire sure the app is the cause, but it's strange that I don't have it installed, but in my google play account it appears as "Installed"...

My phone is an Allview X2 Soul Style with Android 5.1.

After I have unchecked the "block apps from unknown sources", now I keep getting prompted the install screen for these apps. I keep pressing "Cancel" but they come again every half an hour or so. :(

EDIT2: Here are the adb logs requested: Windows and Activities

Every now and then (and it's getting more and more frequently), I get a notification that some app tried to install itself (!) but was blocked because it's from "unknown sources", and it's prompting me to disable the "block install from unknown sources" check from Settings.

It's not a notification but a dialog and it looks like this: 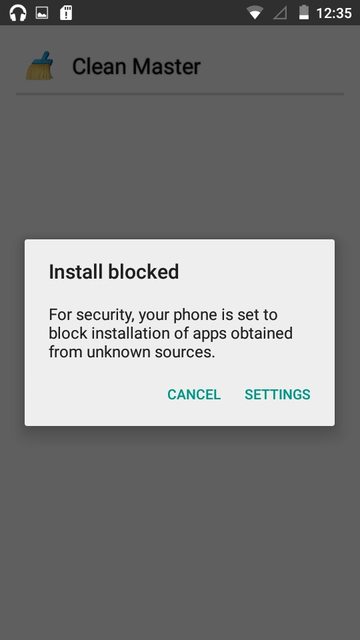 At first I though these might be system updates and was tempted to disable the "unknown source" block, but now I am worried I might have some malware on my phone.

Yes, never enable that Unknown sources setting if you're in uncharted waters.

Where should I search for the APK that is trying to install itself (or the APKs)?

It's a bit difficult to find the app. I recommend finding the cause for the effect. In our case, the effect was the dialog hinting that the Unknown sources setting was blocked. That dialog is shown by Package Installer (a system-cum-core app). Package Installer is used by user or system apps which do not have the permission android.permission.INSTALL_PACKAGES to install an app. Since you did not attempt to side load an app, it stands to reason that an app called Package Installer without your consent. Our imminent goal is to find out that particular app.

In the highlighted line, the string after launchedFromPackage= and before userId is the package responsible for launching Package Installer app. In your case it would be a different package name. Note down that package name (henceforth denoted as <pkg>).

Now that we know the immediate cause we can hunt down the home or in other words, the apk. Execute the command:

Note: Finding the location of apk is required only for forensics. If you're not interested in that, I recommend you don't bother with this step and immediately jump to the heading Uninstall/Disable/Hide the app.

The string next to package: is the location of apk. You can also find the same information inter alia through the command:

If you know the label of the package or can get to know it through any means (such as with AppXplore) then go into the application manager under Settings app which typically comes down Settings → Apps → All apps in stock Android, find the malware app and uninstall it.

The package would remain disabled or hidden until you revert the changes.

It has been confirmed by question's author that the malware app in their phone has the package name com.android.tools.callassistant. I found its label as Caller ID and it has been reported as a malware by AVG.

Some mobile phone manufacturers include an OEM app that automatically download and install other apps. (They reduce the cost of the phone or increase their profits with these marketing deals.) So, you will need to find and disable that app which is doing the sly installs. In my case, it was an app called Cube26.

Use apps like Startup Manager or Task Killer to see if find out which app is doing the downloads. An Android developer can also find out the app by looking at LogCat view of the IDE when the phone is debugged via USB. Ensure that your wireless router is not compromised.

Another thing you can do is to remove your Google account from the phone and add a new one with another gmail address. This will ensure that the apps that you have already downloaded don't get automatically installed again. This time, install only those apps that are well known and have good reviews. Before this, of course, remove/disable unwanted apps.

Not the answer you're looking for? Browse other questions tagged security malware or ask your own question.

0
Lookout - Which application is trying to access the system with no authorization
2
Attempted multiple solutions for malwares like androidSystem, timeService and monkeyTest, but to no avail
1
Unwanted Apps (Maybe malware) downloaded and installed on Android device
1
Apps installing by themselves
0
How to secure install untrusted app
4
For basic users - Any reason to install mobile security App?