How can I set a custom screen resolution for my Android TV box?

I am trying to use a new-ish Android TV box with an old projector. The devices in question are an M8 Android media player and an Optoma EP719 projector.

The problem I am having is this: 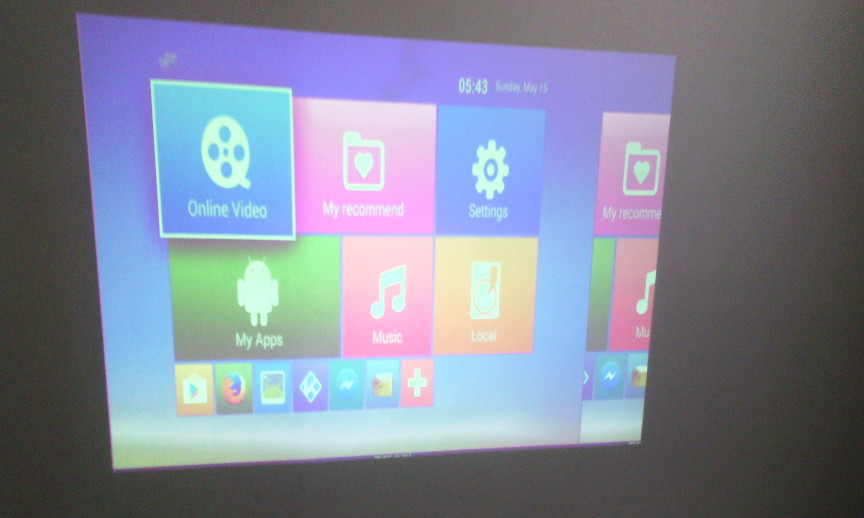 Part of the image is repeated on the right side. This does not appear in screenshots. I believe this is due to the 16:9 aspect ratio of the resolution. Technically this resolution should work, but in any case my preferred solution (and I hope the easier one) is to set the resolution to 1280x1024. I know this works with my raspberry pi already, though I have a similar distortion when trying to set it to 720p resolution.

The problem is, I can't seem to set the resolution to this value. I am able to select resolutions by going to Settings > Display, toggling HDMI auto-detect off, and picking from a list of HDMI resolutions but neither 1280x1024 nor any other resolutions commonly available for monitors but not televisions are listed. I can choose, e.g., 480p, 720p, and 1080i all of which should work with this projector, but all cause some manner of distortion (usually stretching one side of the screen way out instead of duplicating it).

I've tried to manually set the resolution with a few different apps and via the CLI with wm size as in the related question Change the screen resolution to 1024x768 on Samsung Galaxy S3. This causes the screen to become much smaller than it should be, occupying only a small portion of the screen (e.g. the top left quarter).

I've also tried setprop hw.hdmi.resolution 133 (with 133 being the code for the 1280x1024 resolution, I think) then disconnecting and reconnecting the adapter as suggested in the other related question How to change external screen resolution?. That didn't work either.

Is this possible and, if so, how can I do it? Getting the projector to handle 1280x720 resolution would also be acceptable but I am not sure whether that's a problem on the projector end or the device end.

EDIT: I tried flashing the media player with an OpenELEC image. The same issue occurred even with Kodi's resolution changer. For some reason, it insists on detecting the device as 16:9 even though it reports itself as 4:3.

I had found a similar situation using a TVbox, a was trying to change the resolution to full HD (1920x1080), the solution was:

Instead of changing the resolution change the dpi density of the screen.

use this command to change the dpi

Not the answer you're looking for? Browse other questions tagged screen-resolution .