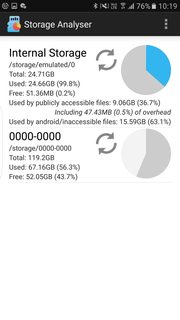 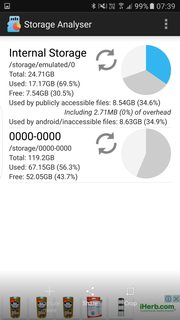 Guys, I've got a Galaxy S7 Edge (Exynos version) which just received an update over the weekend from Samsung. Since then, I've had a really weird issue with the phone suddenly telling me that all the storage is used up and I need to delete/remove apps even though I had over 7gb free just a while ago.

I finally managed to get screenshots from Storage Analyser showing the status at 7.39am this morning and 10.19am - at 7.39am, I had 7.5gb free in internal storage and "android/inaccessible files" was using 8.63gb, however at 10.19am my space fell to 51mb and "android/inaccessible files" was a whopping 15.59gb! Bear in mind I hadn't installed any additional apps over this period...

Any ideas what I can do? I can't seem to see what the additional 7gb was utilised by, is there an app I could use to snoop further? Thanks!

[update] - I used another app - "DiskUsage", which proved more effective and told me the system app "Voice Service" was acting up and taking up 7GB of cache files! I cleared it which solved the problem, but anyone have any ideas why this is the case?

Many apps accumulate junk (ads and stuff) or even updates when you think they are off. They sit idling by, and suck on your battery too. I've used some "cleaners" but by and large they do the same thing.

Try force stopping the app when you aren't using it. If you never use it try disabling it. Some of these things will boot right back up after a restart, reset, or turning your phone off and back on.

Some are connected to other things which won't function if you turn it off. So far I have been able to disable many bloatware apps that did the same as yours. When I accidentally disabled something I shouldn't have, I updated the app on Google play and the system worked again. Hope this helped. Crapps. Hahaha

Not the answer you're looking for? Browse other questions tagged internal-storage system files samsung-touchwiz or ask your own question.

4
27 MB + 4.2 MB = 28 MB? Where'd my space go?
0
A lot of storage space used by 'system files'
6
What's in Chrome's data?
5
I Deleted files on internal storage but free space remains the same
3
Is there a way to move unmovable apps to the SD card in Android 6.0?
0
how to increase inter nal storage
0
Google Photos and Files Apps on Google Pixel 2 is giving the following error “android.process.media has stopped”