When we go to the area where signal is not reachable, we experience "Emergency calls only" or "No service". But after coming-out from that area we sometime found phone is not receiving signal and still showing "Emergency calls only" or "No service" in-spite of no problem of signal in that area. And in that case I usually do "Flight/Airplane Mode" off-wait-on and phone starts receiving signals again.

So, in order to overcome situation (and also consider a case of network-jam), I think should have some solution like running script that auto refresh signal after every n minutes or an application that provides such function.

So, How can I refresh signal from command-line? (or interested in turning "Flight/Airplane Mode" on and off vial command-line) and how about making script that can do this job as per requirement (for example every 30 minute)?

Also suggest any application available and does such job at specified interval of time.

Note: I use rooted phones

I suggest you try an automation app in this case. For example:

You can use Automate app here. 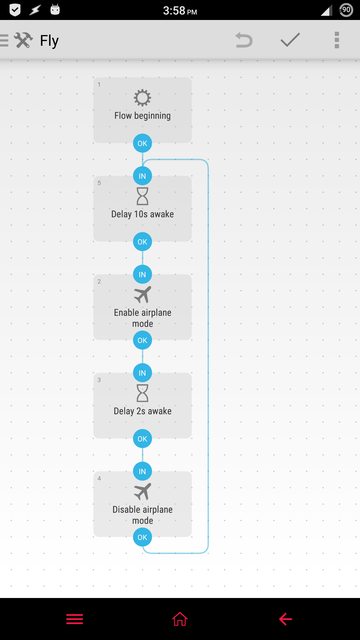 Configure them as you wish. Make sure to have the flow run in a recurring manner, such as shown in above screenshot. You can also setup a trigger for full automation or manually start the flow.

You can also try Tasker to setup a home screen shortcut or a fully automated profile in Tasker. The task should have the following action at least:

Note that once the task is initiated it would continue to run unless you stop Tasker's service or force stop it or reboot the device.

You can get rid of all the command-line stuff by using Secure Settings with Tasker. It also requires root access however.

MacroDroid is yet another app capable of achieving the task. It has all the relevant actions i.e. to toggle Airplane mode, wait for certain time and run a macro (including current macro) to achieve a loop. Give it a try.

It is to be noted that a home screen shortcut can be made by all the aforesaid apps.

Not the answer you're looking for? Browse other questions tagged applications mobile-network command-line signal airplane-mode or ask your own question.

3
How to turn off cellular radio in Lollipop/JellyBean using adb?
1
Home screen icon for terminal program?

4
Does Gingerbread use extra battery power to make calls when the phone has poor signal?
6
Nexus 4 getting “No Service” until a reboot after losing signal
0
Convert signal strength to dbm
0
How to run a script on a rooted android device?
3
How can I force-stop all user applications that are running?
0
Signal Private Messanger - Permissions?
0
Help automating Wi-Fi Calling or Airplane mode toggle with Tasker