The OnePlus Three is out and I got mine yesterday. It comes with speed charging (which OnePlus calls "Dash Charging"). As I read, it only works if the plug it comes with and the USB type C cable it comes with is used.

I'm worried that the battery will suffer from frequent speed charging when it's not needed (for example when charging over night or when at home for a long time during the day). Is this concern justified or won't it have a significant impact on the overall life span (not only a single charge-discharge cycle) of the battery? If it isn't ignore the next paragraph.

Is there a software solution for this, other than installing a custom rom by which it'd lose the speed charging functionality altogether? If there isn't, I could either charge it on my laptop (USB 3.0), on my Nexus 4 plug (1.2 A), or buy a different USB type C cable (and use the original OnePlus plug, in the last case). Which do you consider the best option?

It has been suggested by @bmdixon that this is a duplicate of that question which is not the case because neither does that question take into account additional wear on the battery caused by speed charging, nor does my question necessitate keeping the phone connected to the charger for an extended period of time after the battery has already been fully charged.

Dash Charge carries more current than other fast charging solutions, and at lower temperatures. Normally, heat generated through charging is dissipated in the phone itself - this causes performance issues during active charging, throttling CPU and GPU speeds. By shifting the power management system and heat dispersion elements to our Dash Charge Adapter, very little heat ever reaches your OnePlus 3.

AFAIK there is hardly any literature available on VOOC, or the improvements made by One Plus, so it is up to you to believe it or not.

Edit: Tamoghna in his comment being an owner of device, has clarified that any Type C adapter can be used , of course without Dash Charging. Thanks Tamoghna. For the OP , it makes the choice easier of going with third option 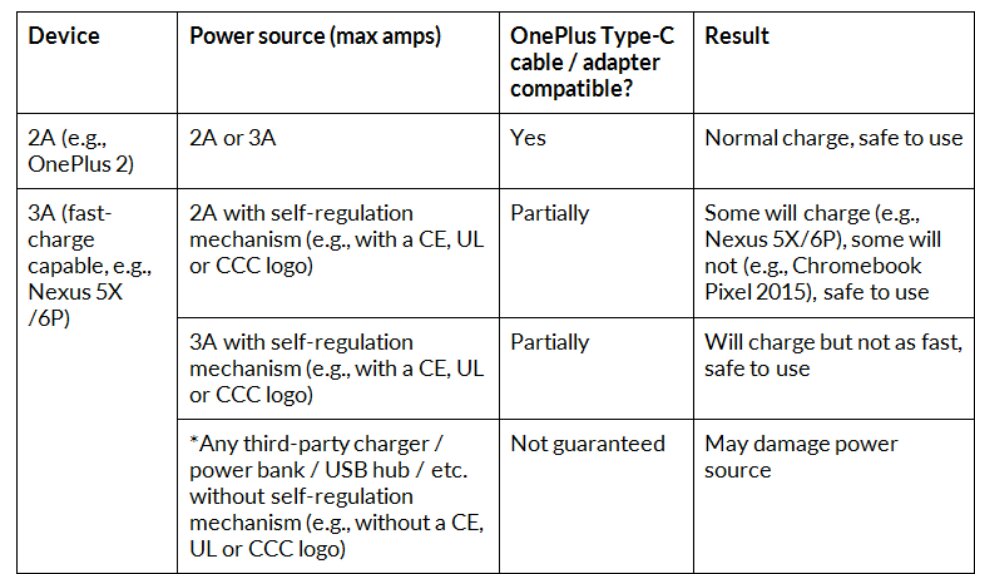 Not the answer you're looking for? Browse other questions tagged charging oneplus-two oneplus-3 or ask your own question.

5
Samsung Galaxy Tab, charging technique through USB Cable
7
Nexus 4 problems when charging
1
Will charging a phone with a different USB *cable* affect the battery life?
1
Can I charge my phone with many different charger speed types?
1
What cable and charger do I need to get the fastest charge speed on my Samsung Galaxy S8?