Easy and efficient way to run GNU/Linux on top of Android on an x86 device?

I have a quite powerful x86-64 Android phone. I want to run a GNU/Linux desktop distro (preferably Debian-based) on top of Android.

I have the stock firmware, but rooted and with Xposed Framework.

I know about Complete Linux Installer, and it seems excellent. But they have a pre-prepared image. I assume that image is ARM, so it won't work? Right? Also, they say my ROM has to support "loop-devices." Does it? And if it doesn't is there any tweak to enable it?

But I'm sure there must also be tons of other ways to do it? FWIW I have access to a laptop with an Intel processor that I can use for the process. (But I'm not too keen on hours of tinkering to make it work.)

Other than that, I want to really take advantage of the specs of the phone. A user friendly process is also a plus.

Please note that even though I have a accepted my own answer here, I still very much welcome additional answers.

I found way to do this that I'm very happy with.

I used Linux Deploy. (It requires root, but here's an alternative for those who don't want to root.) 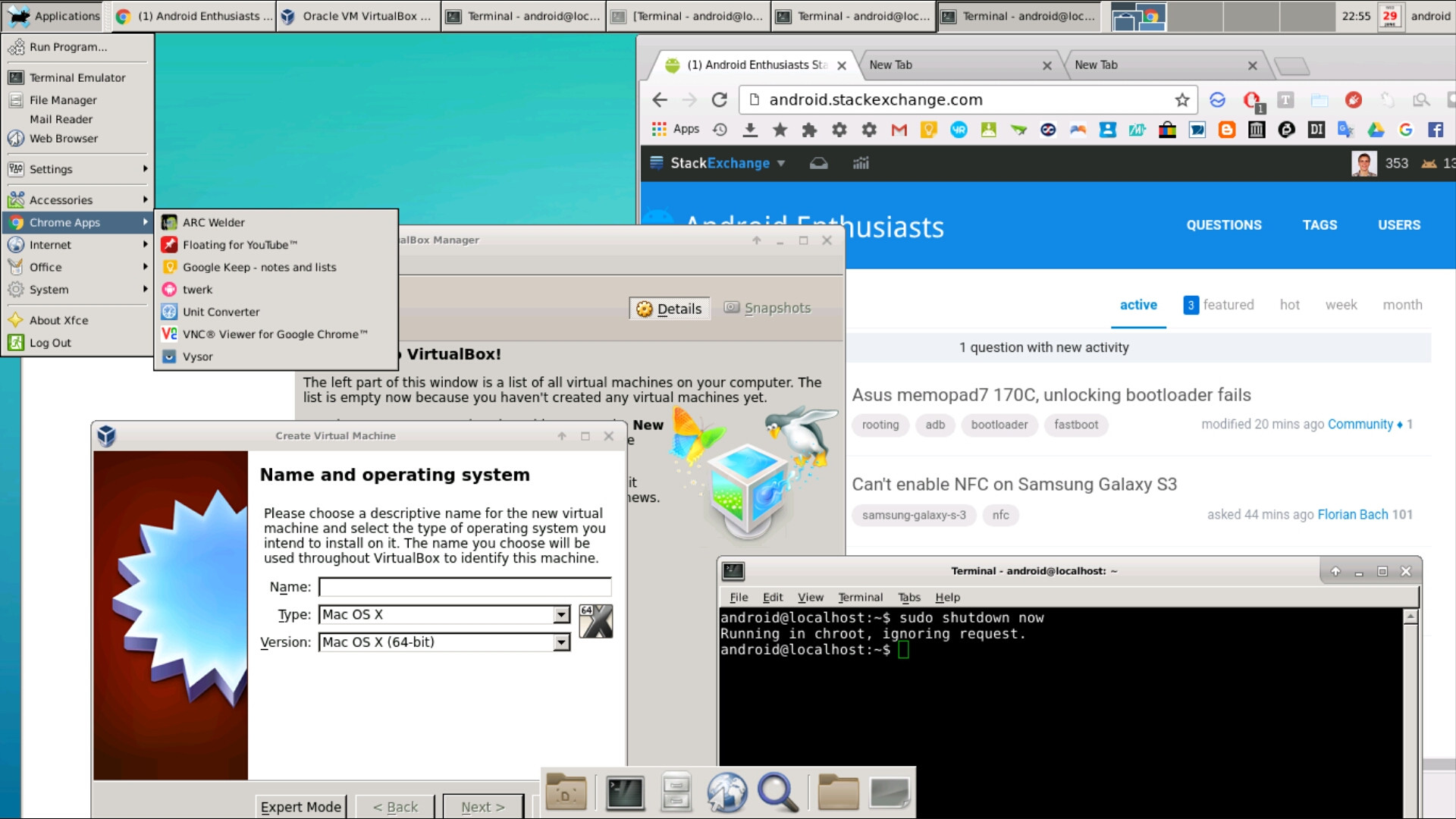 It performs really well. I had no performance issues. Note that this is not a virtual machine. Android and Xubuntu share the very same Linux kernel at the same time. If, while this is running, I switch to OS monitor (in Android), I can actually see the individual processes from Xubuntu (dpkg, etc.) running and how much of the CPU they're using. (That has to be enabled in a setting, though.)

An external keyboard and mouse are a must (though not strictly required). And an external monitor is also a good idea. Or you can just VNC into this system directly from another computer. Linux Deploy supports that out of the box.

The setup is really easy. The default settings of Linux Deploy pretty much work. Just select your distribution and desktop environment. But, by default, the system creates a 2GB .img file as a file system. That wasn't enough for me. So since the internal storage of my phone is ext4 formatted, I was able to set it to 40 GB. If yours is FAT32, the maximum will be 4GB. But it's also possible to have a directory or partition instead of a .img file. (Although I didn't figure out how to do that.)

The process is described in detail here. Skip down to the "Linux Deploy" section. It's important that you install the correct version of Busy Box. Otherwise, it won't work.

This kind of thing has potential. If you have a powerful enough phone, it can actually replace your desktop computer in many cases.

Not the answer you're looking for? Browse other questions tagged installation linux or ask your own question.

2
Running Linux on Android with a rooted OPO

14
Can you run Linux command line apps on Android?
1
Install Android to Samsung Galaxy Tab 2 with GNU/Linux
1
Install/Run Android Skype on ARM LInux?
0
Kali Linux And Android
5
How to run Android in Virtualbox on Linux?
0
easy (command line) way to transfer a folder of photos from Android phone to Linux Debian desktop