How to Organize Home Screen Icons in Folders?

I am using a Samsung Galaxy A3 2016 (SM-A310F) smartphone with Android 5.1.1. I am trying to combine several icons on the home screens into folders, like I did on various other Android devices before.

Samsung's manual for SM-A310F indicates that creating folders works like on the other Android devices I used; by tapping and holding an icon for a few seconds, then by dragging it onto another icon (to create a new folder) or onto an existing folder (to add the icon to that folder).

However, this does not work on the phone I am using: Holding an icon does not do anything while in the normal mode: 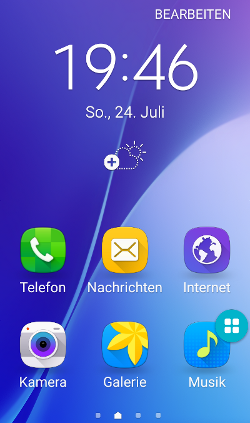 The home screen can only be edited after tapping Bearbeiten (Edit) in the top right corner of each of the home screen pages to switch to an edit mode: 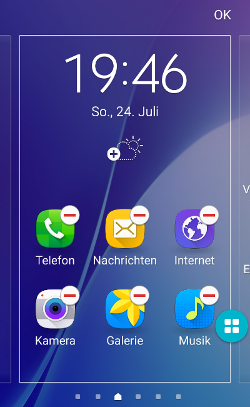 In there, icons cannot be dragged, only deleted (each icon is adorned with a little "minus" overlay icon in this mode). If this is not the standard behaviour of Android 5.1.1, I am seeing no indication of that in the system info.

So, my question is: How can I create folders on the home screens in Android 5.1.1?

I found one vaguely similar question, but I am not looking for installing any special launcher apps or exceed the built-in maximum number of apps per folder, I just want to access the folder feature that has always been around on previous Android versions on devices by different manufacturers.

citation from side http://www.gsmarena.com/samsung_galaxy_a3-review-1174p3.php : In the app drawer, icons are presented as a customizable or alphabetized grid. You can also view only the ones you've downloaded yourself or just hide the ones you don't need. You can also disable some of the pre-installed apps so they won't take up any RAM.

try change launcher (Nova): How to create folder in app drawer of galaxy A3?

I did it by creating the folder in the apps section choose edit, then create the folder by dropping the icons on top of each other. Once done, click on that folder and drag it to your home screen In my findings, doing it directly on the home screen doesn't work.

Not the answer you're looking for? Browse other questions tagged 5.1-lollipop home-screen-folders samsung-galaxy-a3 .

7
Live folders for Contact groups?
10
How do you create a folder on a home screen in Honeycomb 3.0.1 (Xoom)?
3
Can't Add Shortcuts to Home Screen, get Shunted to Folder
2
Delete a folder in my home screen Android 4.0, Aquos?
0
Create a folder on android A3 2016 6.0.1 marshmallow
4
How to find in which folder/app group is an app icon?