On TurboCharging, "Charging Slowly" message displayed on my phone Moto G4 Plus

My Moto G4 Plus has the turbo Charging(30 min Charge 80%) feature. But when I connect to a Turbocharger, I get a display message on my lock screen as "Charging Slowly". On connecting a general charger Phone charges as usual in 3 hrs. I am curious to know, with only the given knowledge, how can I predict whether the issue is in Mobile Phone Hardware or Software or the specific Turbo Charger. 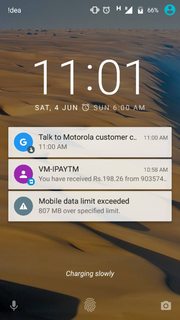 Do revert with your findings

I just hit the same issue. Check that you are using the microUSB cable that came with the Turbo Power charger. I had accidentally switched around my USB cables with a generic one, and noticed that my phone was charging slowly, even after reseating both cable connectors. When I replaced the generic cable with the original cable, it enabled TurboPower charging straight away.

Not sure if this is a case of the cheap cable having thinner power lines (i.e. higher resistance) or if the charger detects that this is the "right" cable. The original cable has a longer plastic lump on the microUSB end than the generic one, and it could be that there is a bit of circuitry in there that is needed for the phone to negotiate the faster charge with the charger, or that the phone checks whether the cable has a low enough resistance on the power lines to support higher current charging. If someone has access to the spec for Quick Charge 3.0 (a Qualcomm chipset feature which looks to be marketed as TurboPower by Motorola) feel free to revise this answer with the real deal.

FWIW, unless your mains connection is bad to the point of arcing, or you are in a severe brown-out, the power draw from the charger is not enough to see any problems from mains extension cords or power boards. These are the output specs from the product page for Motorola's TurboPower 15 wall charger:

So unless the voltage is very low due to some large load on the same power board, or a mains plug is making poor contact, it is unlikely that the charger will have problems drawing ~200mA from the mains.

Not the answer you're looking for? Browse other questions tagged charging motorola .

48
Android phone "charging slowly": How to make it faster

4
My Milestone doesn't always charge
9
When phone is off and I plug it in to outlet the phone turns on instead of charging
1
Battery getting charged with ultra speed and continuous at 1%charge for more than 9 hrs
0
Only charges through USB when screen is locked
2
Nexus 6P charges slowly on stock 6P charger, but 5X charges rapidly
3
Phone behaves weirdly while charging
0
How do I know that a charger is a Turbo Charger for my Moto
0
Samsung phone charges poorly, periodically
2
How to get fast charging diagnostics information