For about a month and a half my Nexus 6P (running Android Marshmallow 6.0.1) has at random times shown a toast of "Check your connection and try again". This toast shows up no matter what app I am in, maybe two or three times a day, usually; so far today, however, my phone has given me this toast maybe 15 times.

When it shows up, I am usually actually connected to WiFi or Cellular (the issue has occurred on multiple wifi networks and multiple carriers), and loading a webpage immediately before/after it pops up invariably works. Here's what the toast looks like: 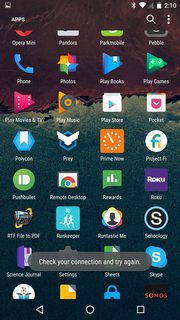 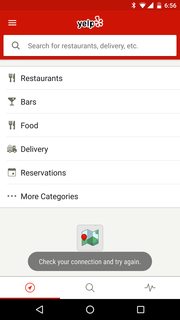 When it happens more The issue occurs more frequently (but not at all exclusively) when:

These toasts are annoying and I'd like to determine the source. Could it be an app? The Play Store? Google Photos? Or a system prompt?

What I've tried so far

Phone Specs Nexus 6P, Android 6.0.1, not rooted, has Project Fi as carrier (used to be on AT&T, issue occurred then too)

Edit: One other solution to a similar question mentions the Freedom app, but I don't have that installed.

Based on your assertion that your issue is not Play Store-related, I believe it is a malfunctioning app.

The Toaster app will help you track down the source of these "toast " notifications.

Records every toast message including the sender package. May be helpful if you get messages and don't know which app sends it.

Update: As confirmed by OP, the Toaster app worked and the app responsible for the repeated notifications (as determined by Toaster) is NYTVR, the VR app of New York Times. Interestingly, there is one user review there which complains of the same problem faced by you!

Update 2: I tried downloading the NYTVR app to see if the same problem would arise (I am also on same OS, though I have a Moto X Play); however, I did not encounter any such notifications, which makes me think that this may not be purely OS-related, but rather a general bug in the NYTVR app that only occurs on certain devices.

If Toaster indicates that a certain app is sending the notification, make sure that app is updated and has settings set in a standard way. If you can't stop the notifications, contact the developer of the app or uninstall it.

Had this issue on my nexus 6 too and tried all the things just like you
As far as i know this happens due to some data fetch that keeps running in the background which is unable to complete and following the android guidelines pops the toast message Check your connection and try again.
As far as i could find this happens due to a bad config during the update or some error during the data fetch.
What worked for me : Flash the stock images again using Fastboot
Now that you're not rooted and prefer using stock, I suggest that you flash the N Beta which has all the updated frameworks.
Good Luck!

Not the answer you're looking for? Browse other questions tagged toast-notifications .

2
What does it mean an ugly pop-up with an smiley face on my lock screen?
2
What is this mysterious blue dot?
0
Duplicate Notifications for Multiple Apps