When phone is locked and I'm inputting the PIN, there's a visual feedback on each keytouch, some sort of ripple animation around the key.

How can I disable that?

Your concern from a security point of view is very valid for these two reasons:

A smudge attack is a method to discern the password pattern of a touchscreen device such as a cell phone or tablet computer .... The smudge attack relies on detecting the oily smudges left behind by the user's fingers .... Under proper lighting and camera settings, the finger smudges can be easily detected, and the heaviest smudges can be used to infer the most frequent user input pattern (the password). The researchers were able to break the password up to 68% of the time under proper conditions. 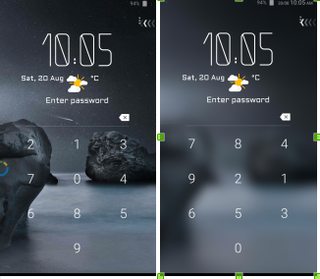 OP's device is not rooted but has indicated in comments that he is willing to root the device to meet his requirement . Rooting without fully understanding the risks could be a bigger risk. IMO, rooting the device and taking adequate precautions to safeguard against the risks is highly worth it. It is up to OP to decide which course but using app based method to start with could be a good start.

Edit: I just noticed your edit, which shows that the free version of app is unusable due to ads. Unfortunately, Free always comes with a price tag of ads as far as apps go ( There ain't no such thing as a free lunch at play !). So your options are limited to a) buying the pro or buying an ad blocker for unrooted devices b ) searching for other apps from the list at serial 1 on notes below c) Root your device and use Gravity box or flash a ROM that has this feature inbuilt (understand CM 11 , which is quite old has it - I am not aware of other ROMs)

There isn't much one can do about that, unfortunately

I have been searching and there appears to be no free without adds. Also searching for timepin throws up similar apps which modify PIN based on current time in various configurations. But all of them are ad supported.

Not the answer you're looking for? Browse other questions tagged 6.0-marshmallow lock-screens security touchscreen or ask your own question.

23
Where to find a PIN lock screen that scrambles the keypad on every use?
2
How do I stop the lock pattern from being revealed after I got it wrong?