WhatsApp MessageService is always killed shortly after exiting the app

A couple of days ago I noticed that I no longer receive WhatsApp messages until I manually start the app, which is when the pending messages get delivered all at once.

I started my investigation by monitoring the com.whatsapp.messaging.MessageService in the Application Manager.

Here's what it looks like at first, after I exit WhatsApp: 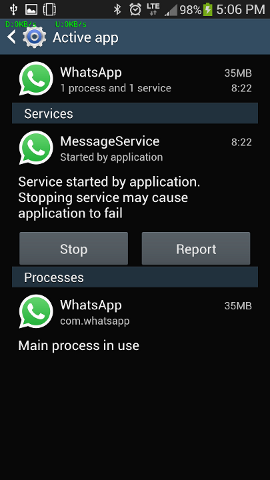 And here's what it looks like a few minutes later: 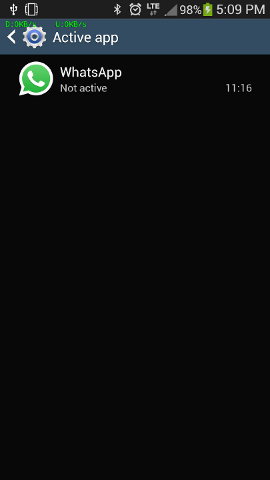 It looks like the MessageService either quit, or it was terminated. To verify this, I checked with adb. I can see the service at first:

But then this service disappears, even though the main process is still running:

The service does not get terminated at the same time. I have seen it killed as early as 6 minutes after exiting WhatsApp, and as late at 11 minutes. But in the vast majority of cases, it is terminated some time on the 8th minute.

I have carefully examined the logcat during the moment of service termination with the following logcat query, which I believe silences only the stuff I don't care about:

I was not able to see anything in the logs that would hint at what happened to the service. Did it quit? Did something kill it? How can I find out?

I thought that maybe the service was terminated b/c the OS was low on RAM, but this does not appear to be so. Here's the RAM at the moment of termination:

While working on this issue, I have used Titanium Backup to freeze all apps that might interfere with normal operation of WhatsApp, so these are the apps I froze:

I also turned off "Per App Hacking", which is an Xposed Module.

Any ideas on how I can learn more about why MessageService is being terminated?

EDIT 1: Is it possible that MessageService is supposed to get terminated, and that WhatsApp relies on GCM to be notified when there are new messages?

I've been having exactly the same issue as yours. I can also see that the MessageService service is being killed after around 10 minutes. After the service is killed, messages are only received when opening the app. While googling today for this problem, coincidentally found this thread which you had posted just 3 hours ago.

I'm using a new phone on which I installed Cyanogenmod 13. I've already tried to change several settings related to battery usage, memory optimization etc., but to no avail.

I've started using this phone 2 days ago and the whatsapp issue has been happening since then. Tomorrow I'll try to uninstall and reinstall whatsapp from the Play Store, since this one was restored from a Titanium Backup backup. I saw in a forum someone who resolved a similar issue by doing that... he also had restored from a TiBu backup and was having such problem.

By the way, your theory about GCM seems to point to the right direction - in my wife's phone the MessageService service is also killed after around 10 minutes, however, she doesn't have any delays in receiving whatsapp messages - so maybe it indeed relies on GCM for that.

Let me know if you make any progress on the investigation or come to a solution. Let me also know if I can help you with anything else.

1
How can I run WhatsApp so that I am always online?
2
Some applications seem to always stay open, even after I exit them. How do I close these?
0
removed as member of a group where I was the admin after reinstalling whatsapp after it crashed!
2
Restore WhatsApp messages after deleting the account
0
How to restore the Whatsapp Messenger icon? Not the app, just the icon
2
App killed from task manager is called foreground state or background state